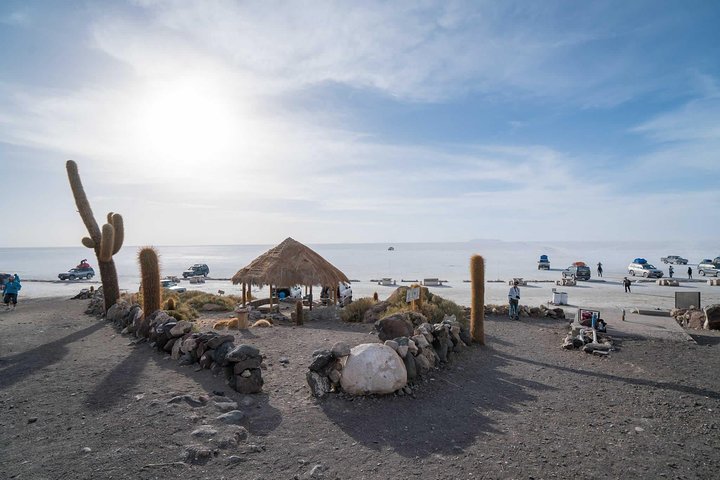 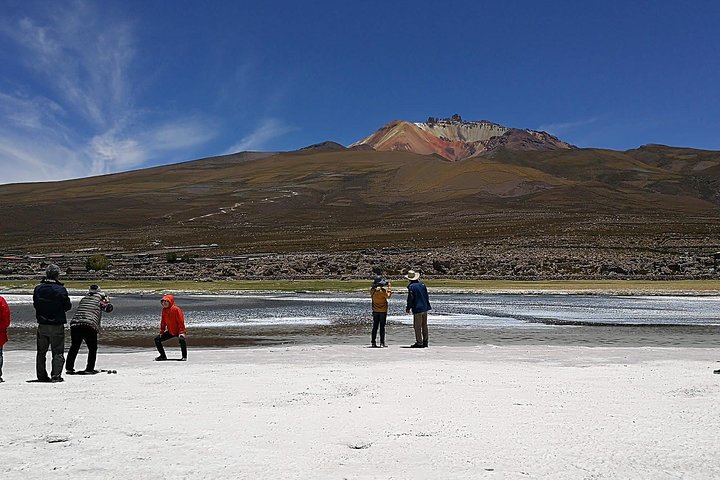 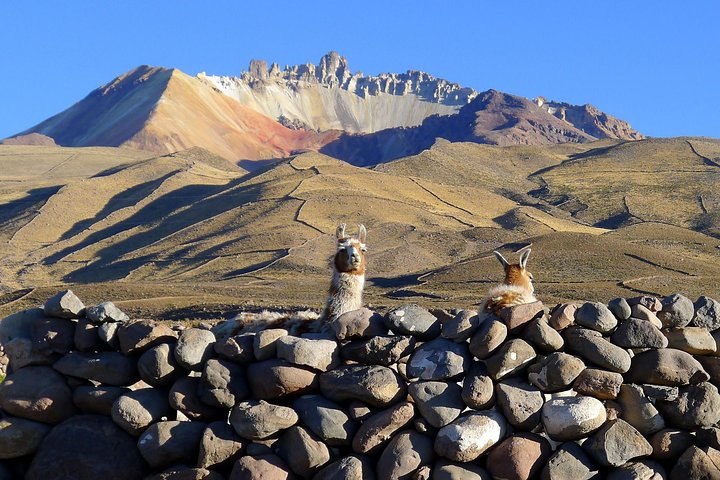 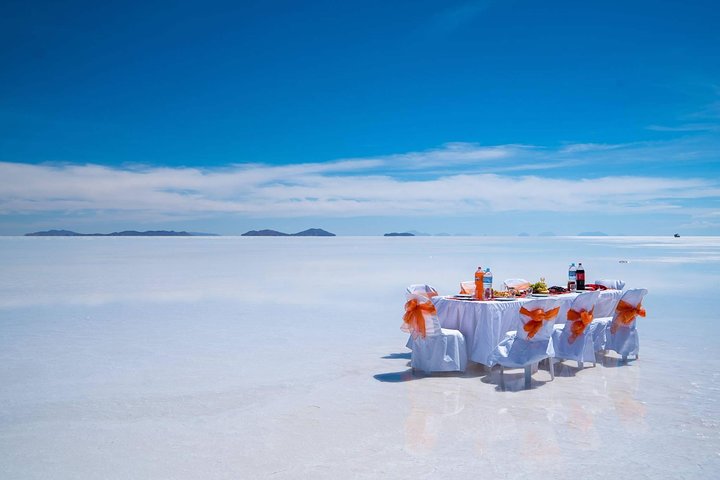 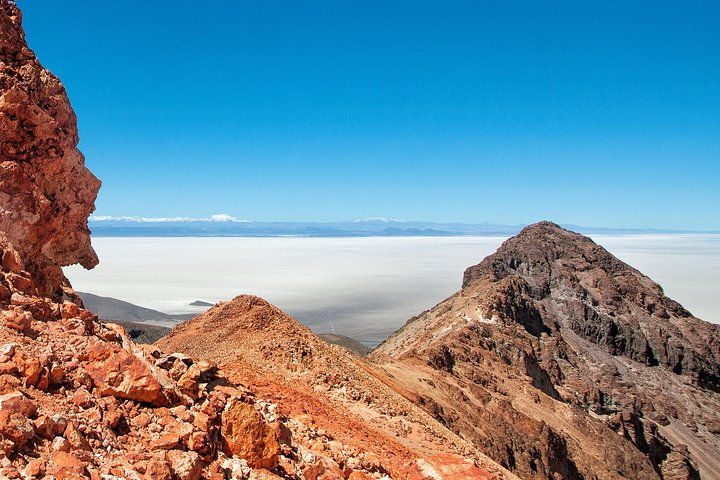 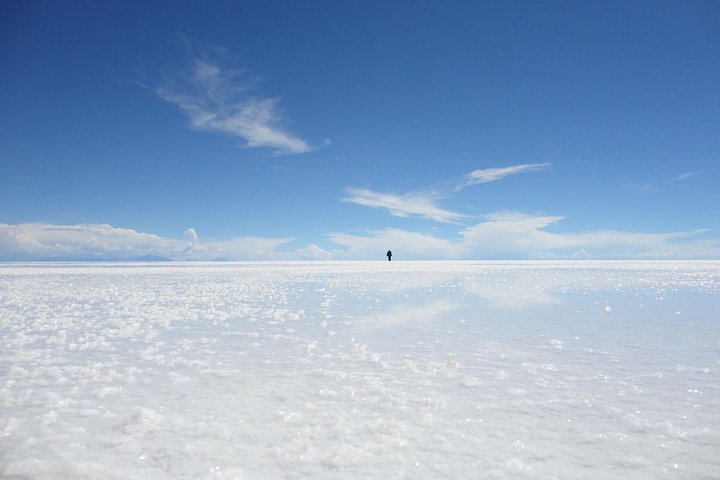 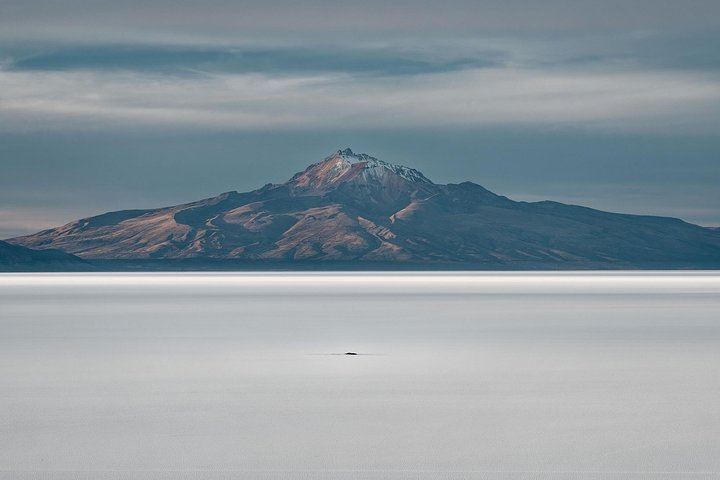 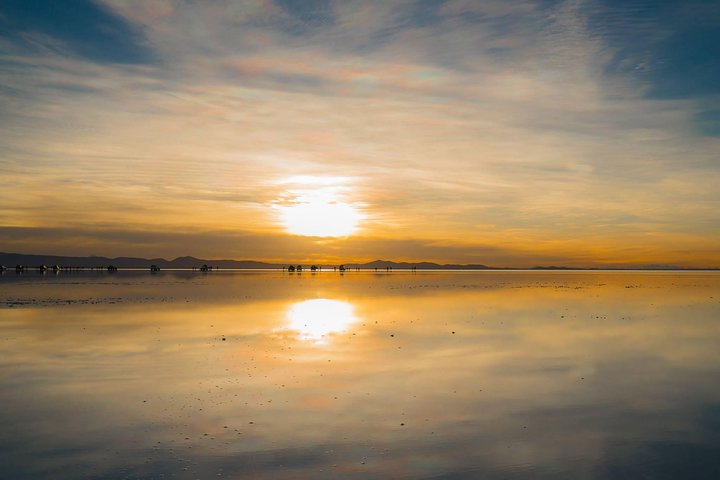 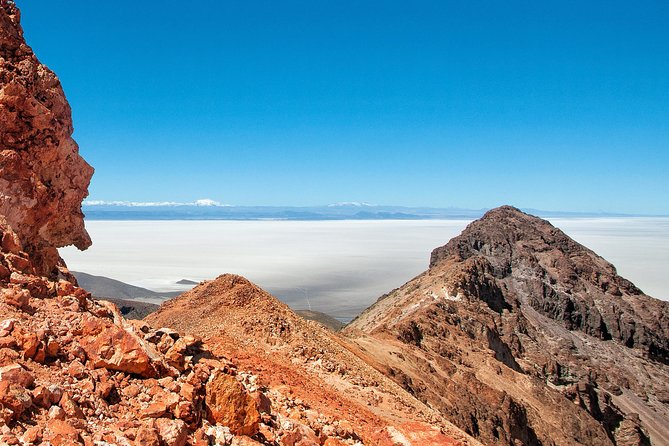 Discover the most interesting places in the Uyuni area. With this tour you will not only visit the Majestic Uyuni Salt flat, but also ascend the Tunupa Volcano (o the first viewpoint) and explore Incahuasi Island.

You will start your journey taking great photos of the dozens of old abandoned locomotives and wagons. The rusting trains create a surreal backdrop.

The next stop is Colchani Village where you will find several stores selling salt handicrafts and traditional souvenirs. Here you can observe how locals dry and pack the salt extracted from the Uyuni Salt Flat.

There are public bathrooms available here.

During the dry season (from April to November), the surface of the Salar de Uyuni has near geometric shapes formed by the salt particles agglomerated in polygons. In the rainy season (December to March) the Salar is covered with water and resembles a giant mirror.

On the way to the Tunupa volcano you will stop at the Dakar Rally salt sculpture for some pictures. You will also have some time at Playa Blanca former salt hotel, this hotel was closed due to the environmental impact that it was having on the salt flat.

Next to the Hotel there is a small mound with several flags from around the world. These symbolic flags have been left by travelers visiting Salar de Uyuni. We invite you to carry a flag of your country and leave it at this significant point in the Salar de Uyuni.

You will reach the north side of the Uyuni Salt Flat where Coquesa village is located. Twenty-five families make up the original population of Coqueza, but only 12 of them are permanent residents. Coqueza community is located between the impressive Uyuni Salt Flats and the legendary Thunupa Volcano, whose highest peak reaches 5430 meters above sea level.

You will have lunch enjoying the beautiful landscape. We will offer you as a side dish the delicious quinoa real produced in Uyuni. Quinoa was an important crop for the Inca Empire. They referred to it as the "mother of all grains" and believed it to be sacred.

After lunch we will take you up the slopes of the Tunupa Volcano by car. On the way you will see an abandoned stone town. You will then reach the first view point of the Tunupa Volcano from where there is an exceptional glimpse of the Salar de Uyuni. After walking through quinoa fields you will reach the Chantani Mummies' cave and see how men, women and children were mummified and placed in sacred spots called Huacas.

Next, you will travel to Incahuasi Island, and see hundreds of millenary giant cacti, up to 6 meters high. The Incahuasi Island (an ancient petrified coral reef) is a genuine spectacle of life inside the salt desert.

You will climb Incahuasi Island and reach a viewpoint, from where you will have a 360 degree view of the Salar de Uyuni and a privileged view of the Tunupa Volcano.

Informacion Adicional
"Confirmation will be received at time of booking"
"Not wheelchair accessible"
"Not recommended for travelers with back problems"
"Not recommended for pregnant travelers"
"No heart problems or other serious medical conditions"
"Most travelers can participate"
"This experience requires good weather. If it’s canceled due to poor weather, you’ll be offered a different date or a full refund"
"This is a private tour/activity. Only your group will participate"

Hora de Inicio: 10:30 AM
Duración: 8 To 9 Hours
Lugar de comienzo: Traveler pickup is offered
We can pick you up from your Hotel, the Uyuni Bus Station or Uyuni Airport.