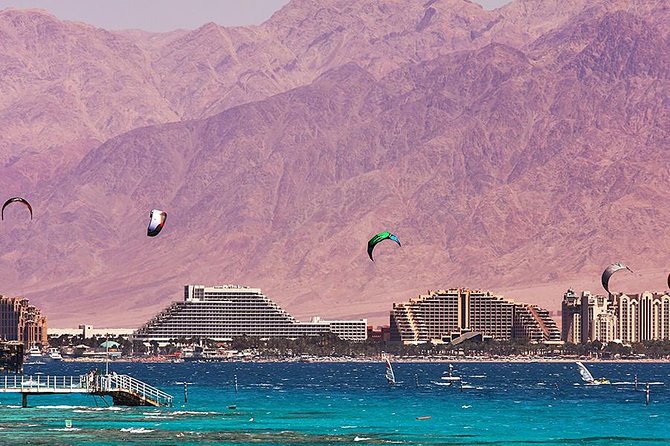 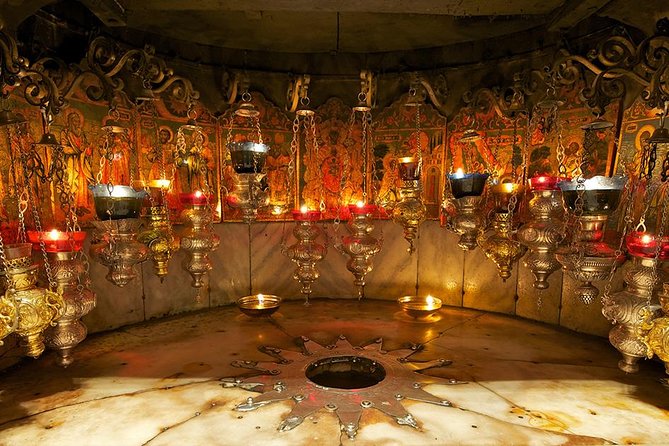 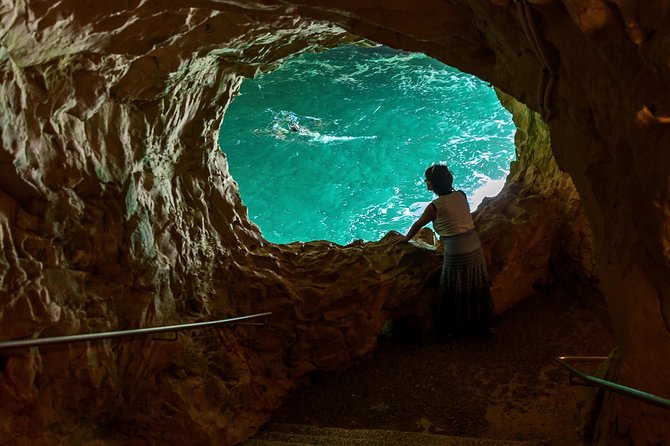 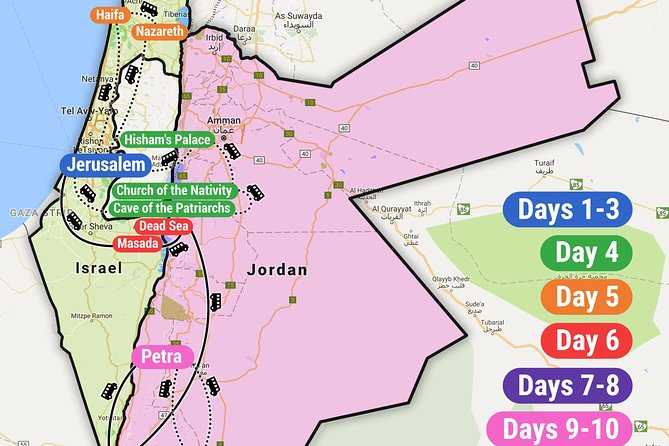 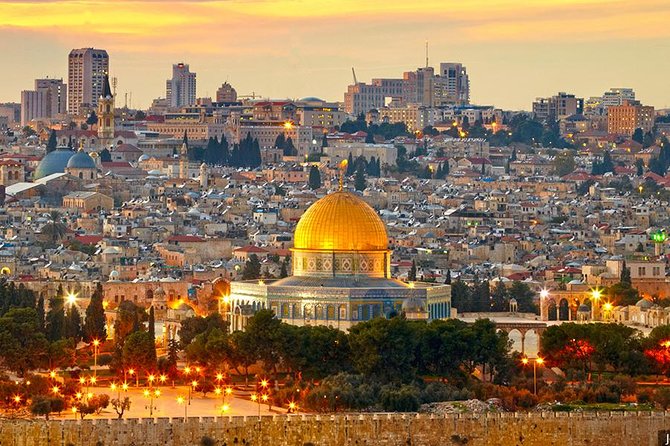 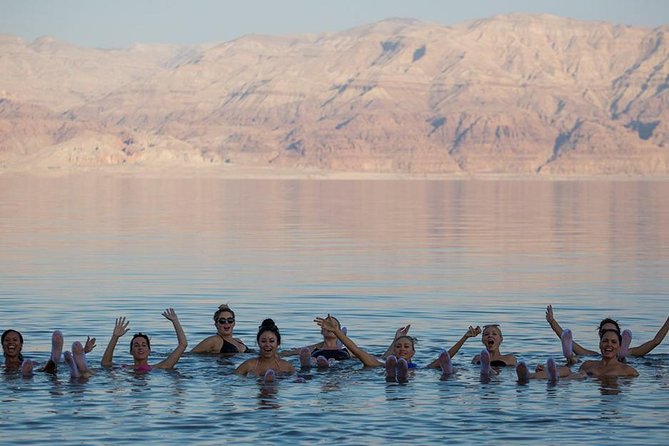 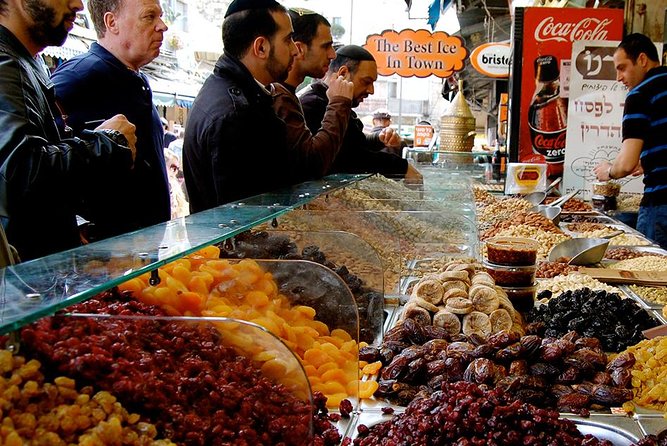 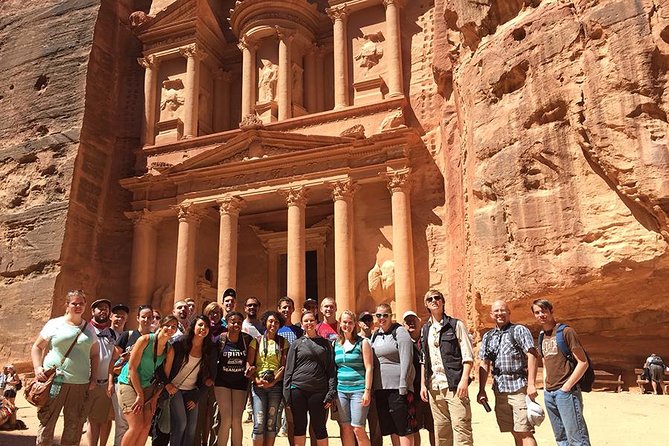 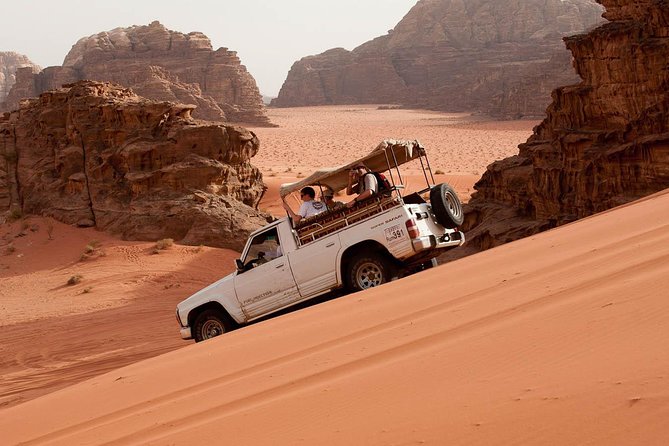 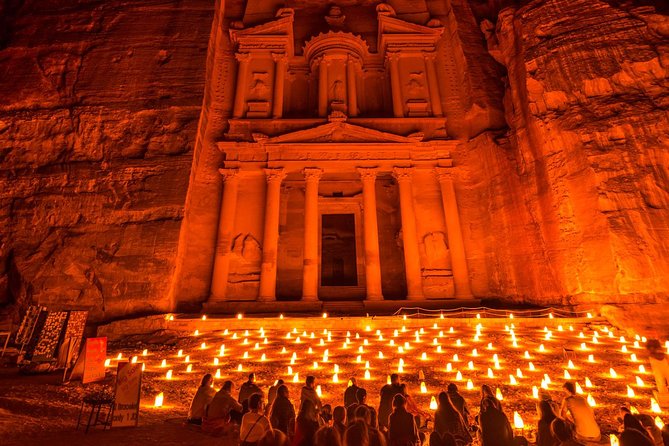 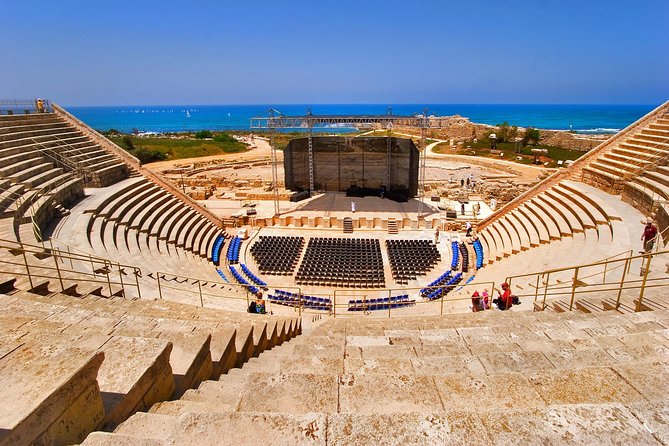 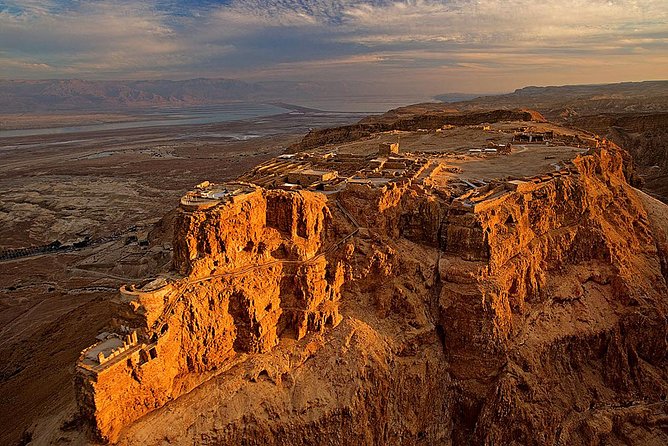 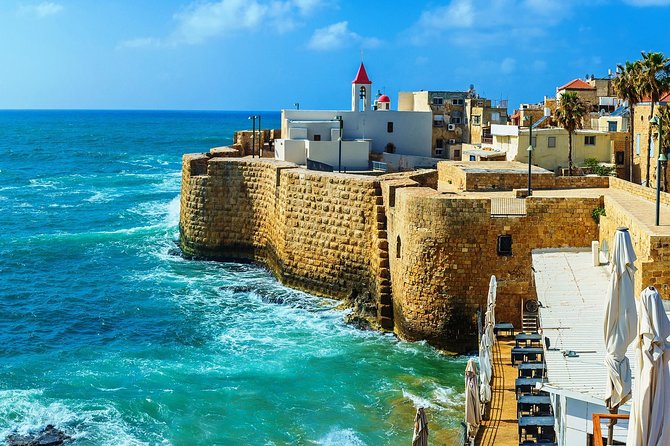 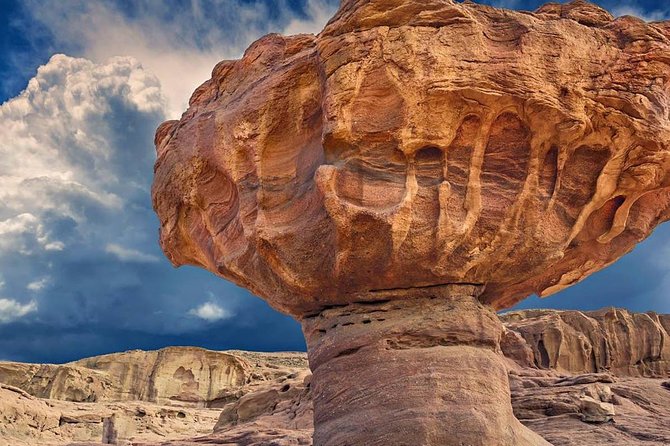 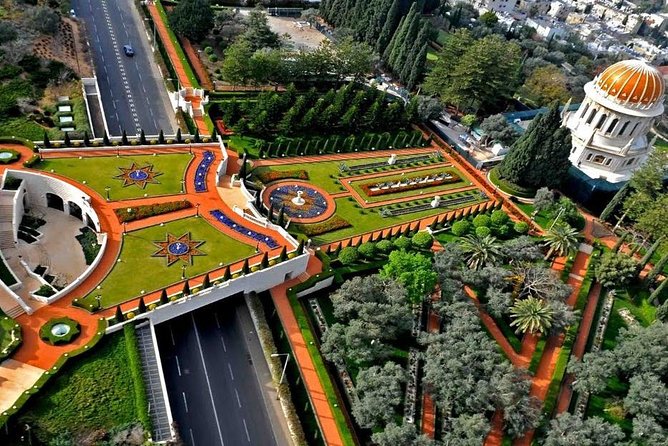 You absolutely will not find another tour out there as packed with activities and attractions as this one, provided by CharlieTheTraveler. You will also not find another tour out there that offers it all "FIRST CLASS," yet for a relatively low price. We have thousands of travelers taking this specific tour every year-and that's because no competitor can beat us on quality, price and substance. Below are just some examples of what you will see and do on this tour:
Multiple Daytrip Tours Leaving From Jerusalem
Sightseeing in Jerusalem-Landmarks, Streets & Souks
A Private Tour of One of the World’s Most Famous Archaeological Sites-Petra
Floating in the Dead Sea
Seeing Where Jesus is Said to Have Been Born, to Have Been Baptized & to Have Walked on Water
2 Cable Car Rides-1 to Grottos & 1 to an Ancient Fortification
Sleeping in the Desert of Jordan
Walking Around Israel’s Prettiest Coastal Town-Acre (a.k.a. Akko)

WE WILL MAKE HOTEL BOOKINGS FOR YOU, UPON REQUEST.

Stop At: Petra By Night, Petra - Wadi Musa 71811 Jordan
Our group tour starts in Petra. We will arrange transportation for you if you are arriving into the capital of Jordan, Amman. The drive from the international airport in Amman to Petra takes about 3 hours. Tour members would be arriving at different times. Some may be jet lagged while others, not. Those who arrive early enough and have some energy should join us as we see Little Petra. It is a 15-minute drive away from town. Later this evening, if open to the public, we would check out “Petra by Night.” It is nothing short of a magical experience to see part of the rock city illuminated by candlelight. Note that Petra by Night is not open every night.
Duration: 2 hours

No meals included on this day.
Accommodation included: Hotel Options & Pricing Provided After Booking Has Been Made (you can book through us or with your preferred hotels)

Stop At: Petra - Wadi Musa, Petra - Wadi Musa, Ma'an Governorate
Today we explore Petra and then relocate to the valley of Wadi Rum.
Established possibly as early as 312 BC, Petra is famous for its rock-cut architecture and water conduit system. This archaeological park has been a World Heritage Site since 1985. UNESCO described it as “One of the most precious cultural properties of man’s cultural heritage.” Petra was also chosen by the Smithsonian Magazine as one of the “28 Places to See Before You Die.” Popular attractions include the Treasury, a roman theater, royal tombs, a monastery and a winding sandstone canyon known as the Siq.
The evening ends with a 2.5-hour drive from Petra to Wadi Rum. Sleeping in the desert is another highlight of our tour.
Duration: 4 hours

Stop At: Wadi Rum, Wadi Rum, Al Aqabah Governorate
i. Before relocating to Eilat in Israel, we explore Wadi Rum. It is a valley cut into sandstone and granite rock in southern Jordan. The area is best explored by a guided Jeep tour, which we go on. Including the process of crossing the border from Wadi Rum, Jordan to Israel, it takes about 2 hours to reach Eilat. The evening ends with checking out the pubs and bars found along Eilat’s promenade as well as in the main square. Eilat’s beaches, coral reef, desert landscapes and nightlife make this resort a popular destination for domestic and international tourists alike.
Duration: 3 hours

Stop At: Timna Park, Eilat 88000 Israel
The day starts with snorkeling off the Red Sea’s Coral Beach. These coral reefs remain relatively pristine. All snorkeling gear is provided today. From Eilat, we later go on a daytrip via a 1-hour drive to Timna Valley. There we have a Jeep tour as well as go hiking in the area. Timna is rich in copper ore and has been mined since the 5th millennium BCE. This valley is notable for its uncommon stone formations and sand. Although usually red, the sand can turn yellow, orange, grey, dark brown or black. Light green or blue sand occurs near the copper mines. Water and wind erosion have created several unusual formations here.
Duration: 3 hours

Day 5: Sightseeing in One of the World's Most Revered Cities, Jerusalem

Stop At: Jerusalem, Jerusalem, Jerusalem District
Today we relocate to Jerusalem via a 5-hour drive. There we are provided with a private guided tour, checking out landmarks, famous streets and souks.
Jerusalem is a city of both faith and fun. It also helps you better understand and appreciate the evolution of great civilizations. Whether you wish to humble yourself with prayers in sacred shrines, play card and board games with Palestinians on the streets and/or simply walk aimlessly around world heritage sites and along ancient alleys, know that you aren’t just anywhere. You are in Jerusalem, a beautiful city that is so dear to millions of people across the globe.
Duration: 6 hours

Day 6: Jesus' Childhood Home, Where He Walked on Water & Where He Was Baptized

Stop At: Nazareth, Nazareth, Galilee Region, Northern District
We go on a daytrip today. First is the biblical town of Nazareth, then the Sea of Galilee, then the archaeological excavations at Capernaum and finally the Yardenit Baptismal Site.
Described as the childhood home of Jesus and known for its many shrines commemorating biblical events, Nazareth is a world-renowned center of Christian pilgrimage. The Sea of Galilee is an attraction for Christian pilgrims who want to visit where Jesus is said to have performed miracles such as his walking on water, calming the storm and feeding the multitude. Capernaum is home to archaeological excavations. Yardenit is a site where Jesus is said to have been baptized. Yardenit is frequented by around 400,000 visitors each year.
Duration: 5 hours

Stop At: Rosh Hanikra, Rosh Hanikra, Northern District
We go on another daytrip today. First is the archaeological ruins at Caesarea, then the Baha'i shrine and gardens in Haifa, then the Rosh Hanikra grottoes (reached by cable car) and finally the coastal town of Akko (a.k.a. Acre).
Caesarea is home to a fascinating Roman theater. The city of Haifa is popular specifically for its garden Bahá'í (terraces) located around the Shrine of the Báb. The Bahá'í Faith is a monotheistic religion founded in 19th-century Persia. It emphasizes the spiritual unity of all humankind. Rosh Hanikra is a white chalk cliff face which opens into spectacular grottoes. Akko (a.k.a. Acre) is a fascinating coastal town otherwise regarded as the holiest city of the Bahá'í Faith.
Duration: 30 minutes

Stop At: Masada National Park, Masada 8698000 Israel
Today we are to make a daytrip to Masada, Ein Gedi and the Dead Sea.

Masada is an archaeological site of ancient palaces and fortifications. Ein Gedi is an oasis and a nature reserve. The Dead Sea is a salt lake that has attracted visitors from around the Mediterranean basin for thousands of years. It was one of the world’s first health resorts and has been the supplier of a wide variety of products from asphalt for Egyptian mummification to potash for fertilizers. People also use the salt and the minerals from the Dead Sea to create cosmetic products as well as herbal lotions. Bring your swimming attire and expect to be floating on water, literally.
Duration: 1 hour

Day 9: Where Jesus Was Born & the Archaeological Remains of Hisham's Palace

Stop At: Hisham's Palace Road, Jericho Palestinian Territories
We go on another daytrip today, this time to the West Bank area, specifically to Jericho and then Bethlehem. Jericho is a town popular specifically for the archaeological remains of Hisham's Palace. Bethlehem is a town popular chiefly for the Church of the Nativity. This is where Jesus is said to have been born.
Note we cannot guarantee that we will be able to stand in front of the Church of the Nativity’s grotto. This is the exact spot where Jesus is said to have been born. It can take hours just waiting in line to see the grotto. Our tour guide is to decide once inside the church.
Also note that ascending the Mount of Temptation in Jericho is not included on today’s tour because females are not allowed inside some of the monasteries. It would be too difficult for us to create a different West Bank daytrip for men and for women. Should you wish to visit the Mount of Temptation, then consider not returning to Jerusalem with the group. Instead, you could take a 1-hour bus ride from Bethlehem back to Jericho and later a 1-hour bus ride from Jericho back to Jerusalem.
Duration: 3 hours

Stop At: Jerusalem, Jerusalem, Jerusalem District
Our group tour ends today. Upon request, we will provide you with transportation to the airport in Tel Aviv. However, we do recommend you spend more time in Jerusalem. If you really want to cover the highlights of this city, then you will need six full days. We do not believe that going on a guided tour in Jerusalem is worth your investment. Instead, we recommend you do it on your own with the help of a book called DK Eyewitness: Jerusalem. You will see a LOT more of Jerusalem this way than by joining a guided group tour.
Steeped in thousands of years of history and home of the monastic religions of Christianity, Islam, and Judaism, few destinations on earth can enchant the way Jerusalem does. The entire walled and ancient city is breathtaking and each of its quarters-the Muslim, Jewish, Christian, and Armenian alike-offers visitors memorable sites and experiences to last a lifetime. Each quarter prides itself on its own jewels. The Muslim Quarter is best known for its souks, traditional Arabic cuisine, and of course, the postcard-perfect and otherwise sacred Dome on the Rock mosque. A stone’s throw from there is another sacred site, the Western Wall. Here the Jewish Quarter stands. Much of this architectural masterpiece neighborhood was recreated after Arab-Israeli warring. Today it’s arguably the city’s best-preserved quarter. The Christian and Armenian quarters are no less spectacular, however, boasting world-renowned landmarks such as the Church of the Holy Sepulcher. It is here where each year millions of Christians kneel to their Lord’s grave giving thanks and praise.
Outside of the walled and ancient city are the Mount of Olives and Mount Zion, rich in holy places, tombs and not the least, the unforgettable City of David archaeological site. As if all that isn’t enough, then there is a modern area of Jerusalem, which entertains people all along Jaffa Road. A bit further along are some highly intellectual museums, a Holocaust memorial, and otherwise, an incredibly authentic fruit and vegetable market located in the district of Mahane Yehuda.
Also worth seeing is Hebron’s Cave of the Patriarchs. Hebron is not included in our itinerary specifically because of the political climate. This city is a 1.5-hour drive away from Jerusalem. The easiest way to get to Hebron from Jerusalem is to take a service taxi to Bethlehem followed by another service taxi to Hebron. Alternatively, we can organize this excursion for you.
Duration: 30 minutes

Informacion Adicional
"Confirmation will be received within 48 hours of booking, subject to availability"
"Not wheelchair accessible"
"Near public transportation"
"Travelers should have a moderate physical fitness level"
"This experience requires good weather. If it’s canceled due to poor weather, you’ll be offered a different date or a full refund"
"This is a private tour/activity. Only your group will participate"

Duración: 10 Days
Lugar de comienzo: Traveler pickup is offered
Transportation will be arranged for you from the airport. We would make convenient arrangements for you to join the rest of us after you have checked into your room.