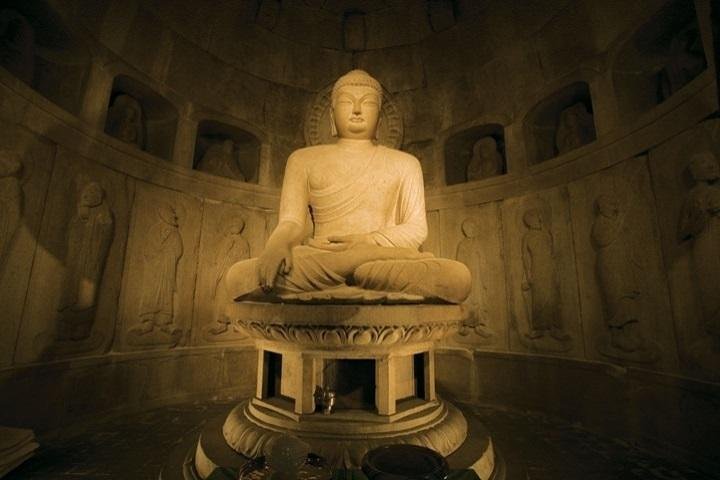 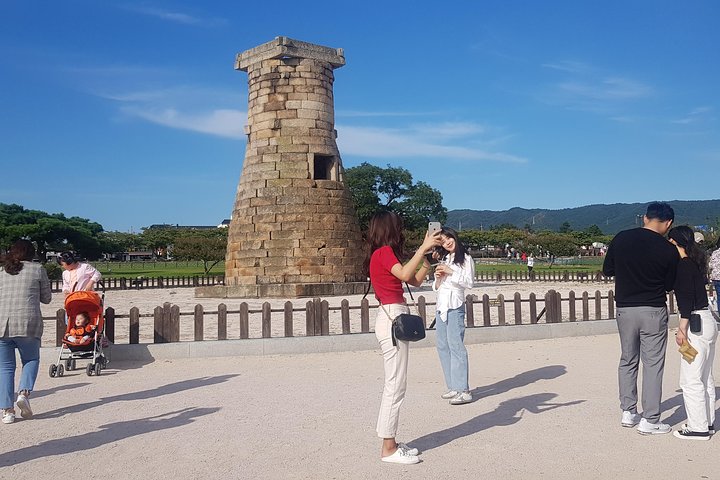 All itinerary, customized and flexible in depends on follow traveler's schedule.

Seokguram is an artificial grotto constructed of granite that comprises an antechamber, a corridor and a main rotunda. It enshrines a monumental statue of the Sakyamuni Buddha looking out to sea with his left hand in dhyana mudra, the mudra of concentration, and his right hand in bhumisparsa mudra, the earth-touching mudra position. Together with the portrayals of devas, bodhisattvas and disciples, sculpted in high and low relief on the surrounding walls, the statues are considered to be a masterpiece of East Asian Buddhist art. The domed ceiling of the rotunda and the entrance corridor employed an innovative construction technique that involved the use of more than 360 stone slabs.

Bulguksa is a Buddhist temple complex that comprises a series of wooden buildings on raised stone terraces. The grounds of Bulguksa are divided into three areas – Birojeon (the Vairocana Buddha Hall), Daeungjeon (the Hall of Great Enlightenment) and Geungnakjeon (the Hall of Supreme Bliss). These areas and the stone terraces were designed to represent the land of Buddha. The stone terraces, bridges and the two pagodas – Seokgatap (Pagoda of Sakyamuni) and Dabotap (Pagoda of Bountiful Treasures) – facing the Daeungjeon attest to the fine masonry work of the Silla.

Large ancient tombs of kings and nobles of the Silla Kingdom can be seen around Gyeongju at the Daereungwon Tomb Complex. There are twenty-three large tombs located here; 13 have been excavated but only 1 (Cheonmachong - tomb of King Michu) is open to the public. The chamber of the tomb contained a lacquered wooden coffin which had burial goods placed around it. A total of 11,500 artifacts were recovered from the tomb, demonstrating the lavish lifestyle of the king. The tomb was excavated in 1973 and is believed to date probably from the fifth century.

Gyeongju Folk Craft Village consists of 40 thatched and tile-roofed houses, lived in by local artisans of traditional arts and crafts skills. Various fields of crafts production including metal, pottery, timber, jewels, hanbok (Korean traditional clothes), and stone-crafts can be found in the village.

At Gyeongju Gyochon Village, visitors can see the House of the Gyeongju Choi Clan (Important Folklore Material No. 27) and try some Gyeongju Gyodong Beopju Liquor (Important Intangible Cultural Asset No. 86-3). The village centers around the Gyeongju Choi Clan, a family known to have maintained their wealth for over 12 generations, producing many important people. Visitors can learn about the lifestyle and spending habits that enabled the family to do this. The village is also home to the site of Yoseokgung, the house of Silla Princess Yoseok. Nearby attractions include Gyerim Forest, Naemulwangneung Royal Tomb, and Gyeongjuhyanggyo Local Confucian Scho

Gyeongju National Museum is loved by visitors and residents alike as it houses numerous historical and cultural artifacts of the Silla dynasty (57 BC - AD 935). The museum recently went through renovation, separating into an art gallery, historical artifacts exhibition hall, Wolji Pond exhibition hall, and a planned exhibition space. In addition to improving facilities for visitors' convenience, Gyeongju National Museum is making efforts to contribute to the community and reestablish its identity as a museum by making efforts to provide lifelong learning opportunities and improve management. As a significant cultural center, Gyeongju National Museum not only strives to preserve, exhibit, and research the rich history and culture of Silla, but also to take a leap forward to become a cultural multi-complex center by promoting international exchange opportunities, social education programs, and a variety of special exhibitions.

Cheomseongdae is the oldest existing astronomical observatory in Asia.Constructed during the reign of Queen Seon-deok (r. 632-647), it was used to observe stars in order to forecast the weather. This stone structure is a beautiful combination of straight lines and curves, and was designated as National Treasure No.31 on December 20th, 1962.

It stands 9.17m high and the base stone on each side measures 5.35m.The Vernal Equinox, Autumnal Equinox, Winter Solstice, Summer Solstice and the 24 solar terms (also known as the astronomical solar year) were determined by observating of stars. The pavilion stone is believed to have been used as a standard of deciding directions, north, south, east and west. The 362 stones used to build Cheomseongdae represented the 362 days in a lunar year.

Focusing on the Silla Period (57 BC - AD 935), the park reproduces Silla architecture and a village of aristocrats, tells children fun stories about the period, and offers symbolic architecture such as Emile Tower and Seokbinggo. Visitors are also invited to participate in things such as the Craft Clinic.

Namsan Mountain is a veritable open-air museum, with 100 temples, 80 stone Buddha statues, and 60 stone pagodas scattered across the mountainside. Topographically, it features nearly 40 valleys and is divided into the Southwest Mountain, a sacred place during the Silla period, and the Southeast Mountain, where many Buddhas can be found around the valleys.

Namsan Mountain is also famous for its scenic landscapes in addition to its cultural heritage. Numerous valleys, unique rock formations, and beautiful trails are abundant throughout the area. Many tourists say, “You cannot say that you know Gyeongju without hiking up Namsan Mountain.” Namsan Mountaint is a place where the scenic nature and long history of the Silla Kingdom coexist, and also where the aesthetic consciousness and religious traditions of the Silla people evolved into the artform it is today

Bunhwangsa Temple is located next to Hwangnyongsa Temple Site in Gyeongju, and is famous for Stone Brick Pagoda, National Treasure No. 30. The temple was built in year 634, during the third year of Queen Seondeok's rule. Prominent Buddhist priests Wonhyo and Jajang resided at the temple. While the stone pagoda is presumed to be originally a 5-9 story structure, only 3 stories remain today. Much of the damage to the padoga happened during the Imjin War (1592-1598). During restoration work in 1915, money from the Goryeo period was discovered, providing evidence that the temple was also under repair at that time. Additional relics include Hwajaengguksabibu (a memorial stone placed in memory of Wonhyo), Samnyongbyeoneojeong (a well in which the three dragons that protected Silla were believed to reside), and the Standing Buddha of Bunhwangsa Temple, Gyeongsangbuk-do Cultural Heritage No. 319.

Gyeongju Donggung Palace and Wolji Pond was a secondary palace used by the crown prince of the Silla Kingdom. It also served as a banquet site for important national events and important visitors. The pond was created in 674, during the reign of King Munmu. The pond features three small islands, and a landscape of 12 small hills to the northeast. After the fall of Silla, the site was abandoned and forgotten. The pond was referred to as "Anapji" from the Goryeo and Joseon periods and onwards. In the 1980s, a pottery fragment with the letters “Wolji” (a pond that reflects the moon) carved onto it was found, revealing the true name of the pond. After the discovery, the site was renamed to the current Donggung Palace and Wolji Pond.

He was the sone of Seo Hyeon, the top General of the Silla Kingdom. Yusin signed up with the Hwarang (aristocratic youth military corps) at 15 and began dreaming of ways to combine the peninsula's three kingdoms.

Kim Yusin acquired his political grip by establishing a strong relationship with nobleman Kim Chunchu and made a name for himself through his prowess on the battleground.

The elaborately decorated tomb is 2nd in grandeur just to those of royalty. Yusin's significant contribution to unifying the three kingdoms was the highlight of his life's achievements.

The tomb of Munmu of Silla is located on the sea. To see the tomb, one must go to a rare and mysterious tomb built between small rocks in the middle of the sea. Although the tomb of Munmu of Silla looks like a small rocky island from a distance, it is located on the rock, and it is like a pond in the middle. The rock is built at regular intervals like a pillar, and a large building looks like a turtle. Water flows in and out of the pond in all directions, as the waters that flow in and out of the lake slowly turn around and out to the west. It is believed that the Silla people artificially refined the royal tomb of Munmu of Silla.

Bomun Tourist Complex is the international tourist district of Gyeongju. This tourist district is formed with Bomunho Lake at its center, located about 10 kilometers east of downtown Gyeongju. The area spans approximately 8,000 km², and contains an international-scale luxurious hotel, family-friendly condos, golf range, and pleasant walking passages that are designed to suit the diverse needs of tourists. The tourist complex attracts crowds of visitors in April, when cherry blossoms are in full bloom. The sight of cherry blossoms around Bomunho Lake and Bulguksa Temple are popular even among domestic travelers.

Informacion Adicional
"Confirmation will be received at time of booking"
"Wheelchair accessible"
"Traveler's with Luggage's at the Airport (PUS) transport possible"
"At time of booking, Cruise ship passengers must provide the following information at time of booking: ship name, docking time, disembarkation time and re-boarding time"
"Please advise any specific dietary requirements at time of booking"
"Minimum 2 people numbers apply. There is a possibility of cancellation after confirmation if there are not enough passengers to meet requirements. In the event of this occurring, you will be offered an alternative or full refund"
"Stroller accessible"
"Transportation is wheelchair accessible"
"Meet up point : Customer's requested time to meet and standby front of exit gate with name picker."
"Meet up location : Customer's requested Busan, Gyeongju"
"Most travelers can participate"
"This is a private tour/activity. Only your group will participate"
"Face masks required for travelers in public areas"
"Face masks required for guides in public areas"
"Face masks provided for travelers"
"Hand sanitizer available to travelers and staff"
"Social distancing enforced throughout experience"
"Regularly sanitized high-traffic areas"
"Gear/equipment sanitized between use"
"Transportation vehicles regularly sanitized"
"Guides required to regularly wash hands"
"Regular temperature checks for staff"
"Temperature checks for travelers upon arrival"
"Paid stay-at-home policy for staff with symptoms"
"Contactless payments for gratuities and add-ons"