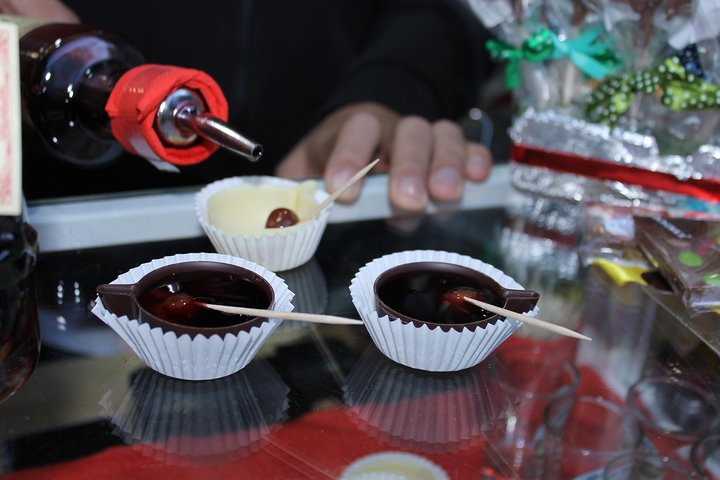 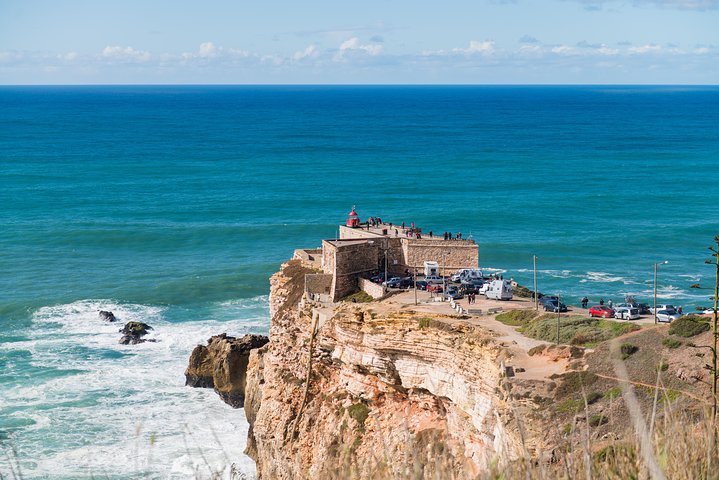 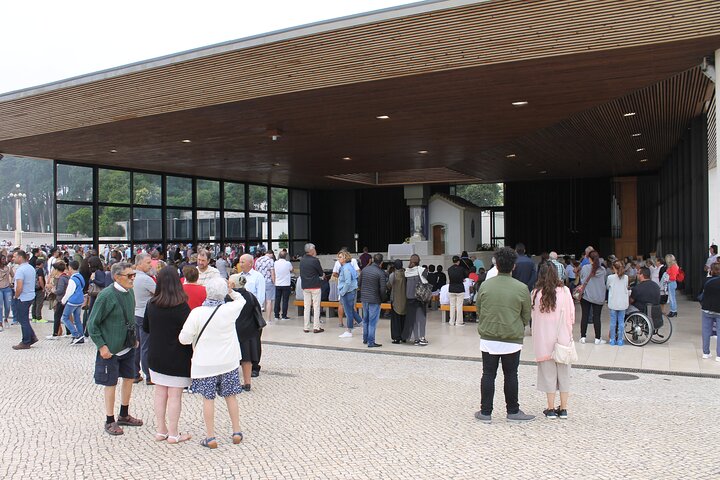 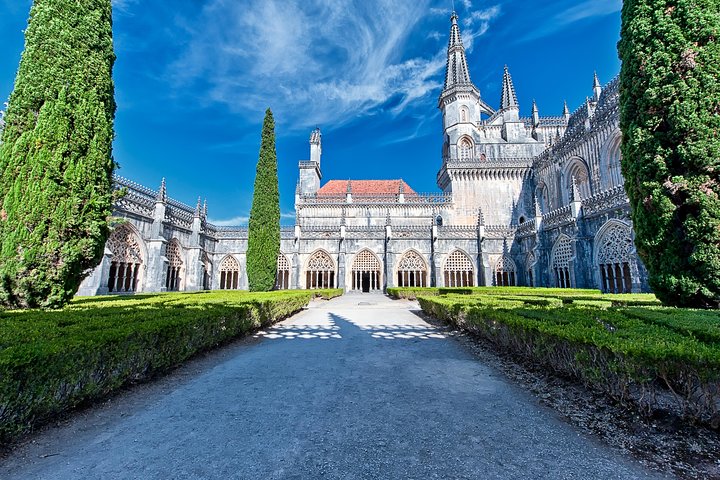 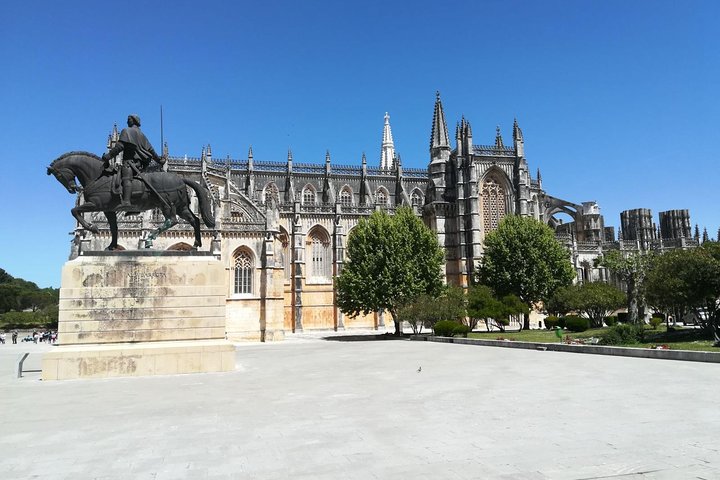 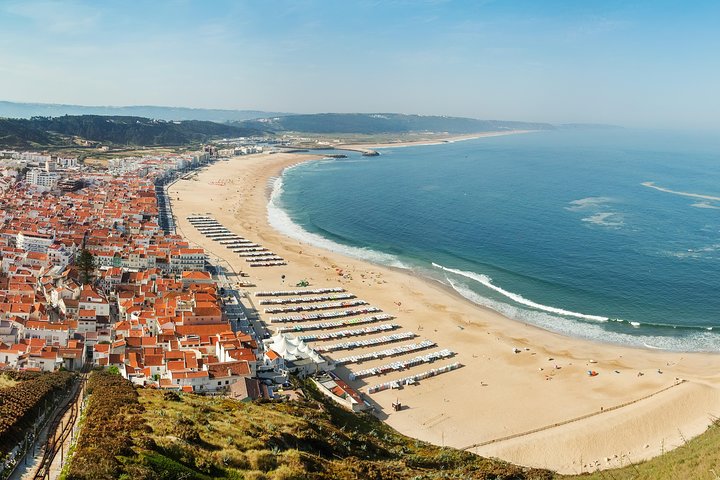 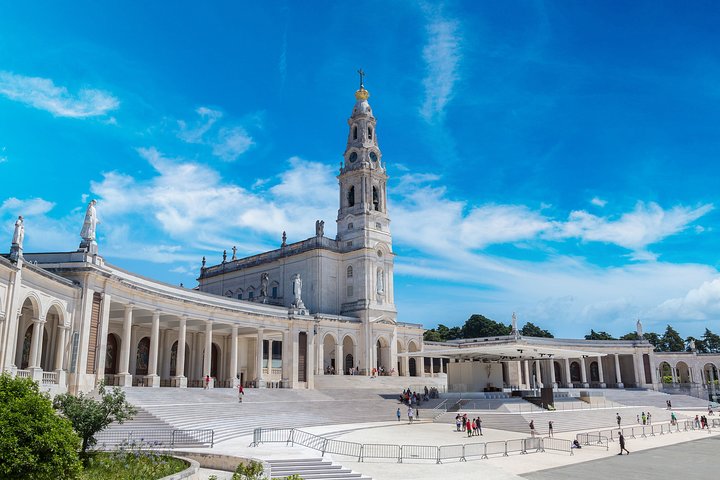 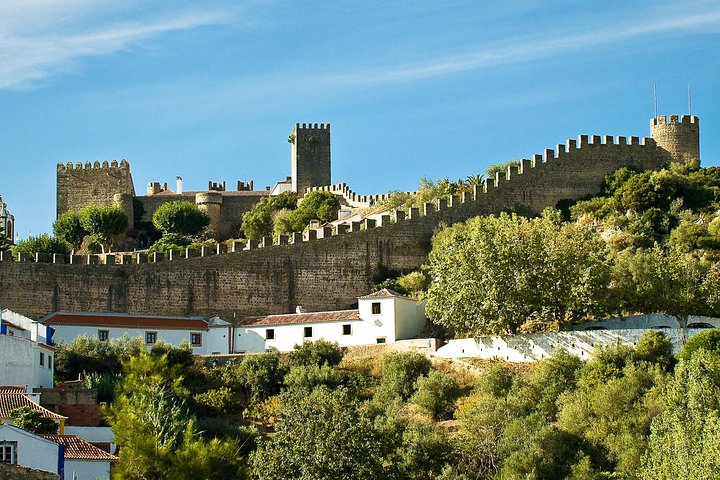 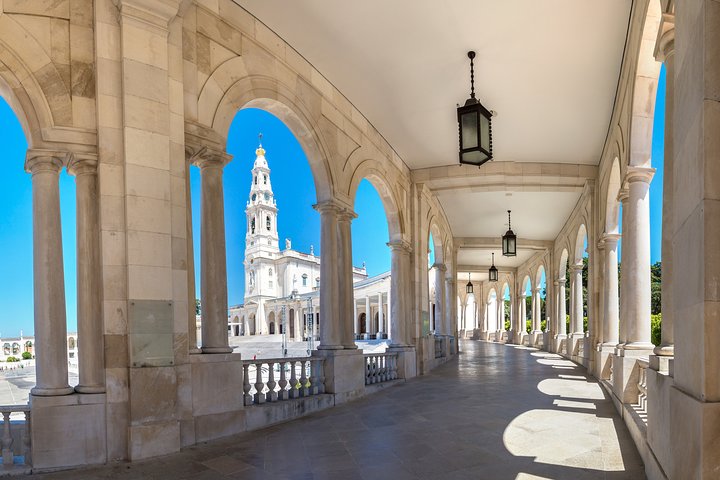 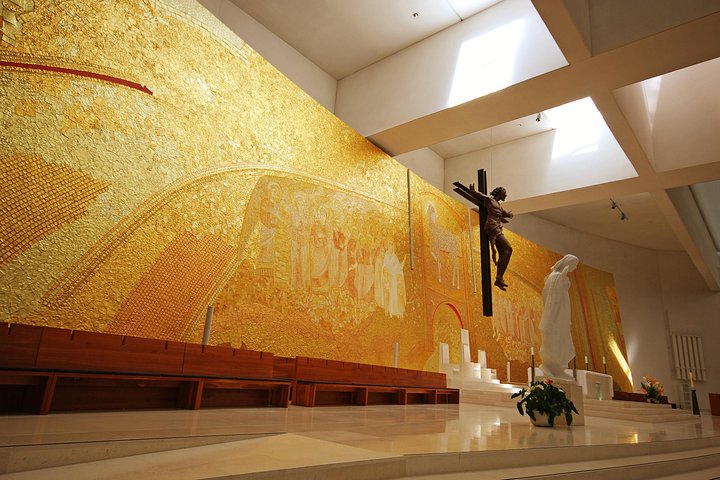 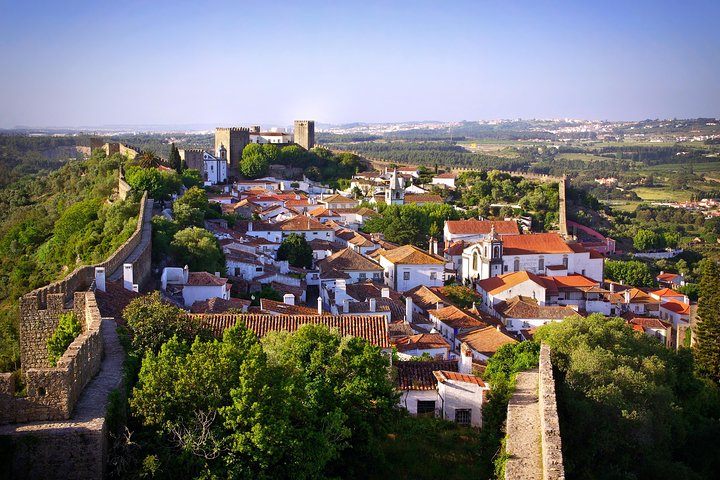 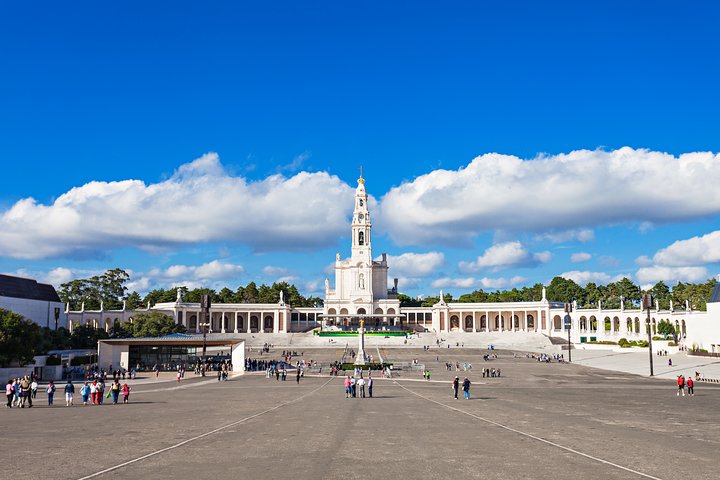 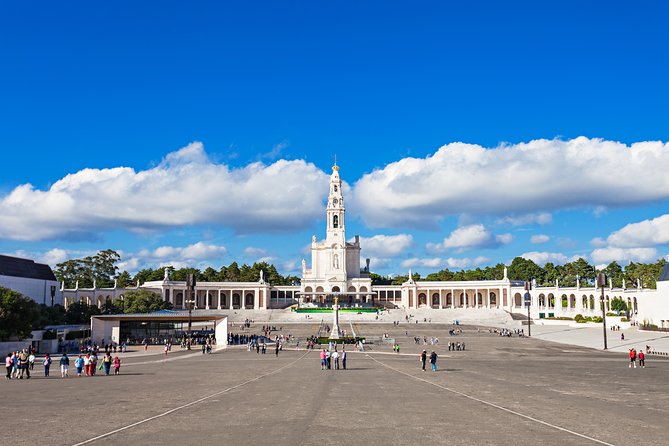 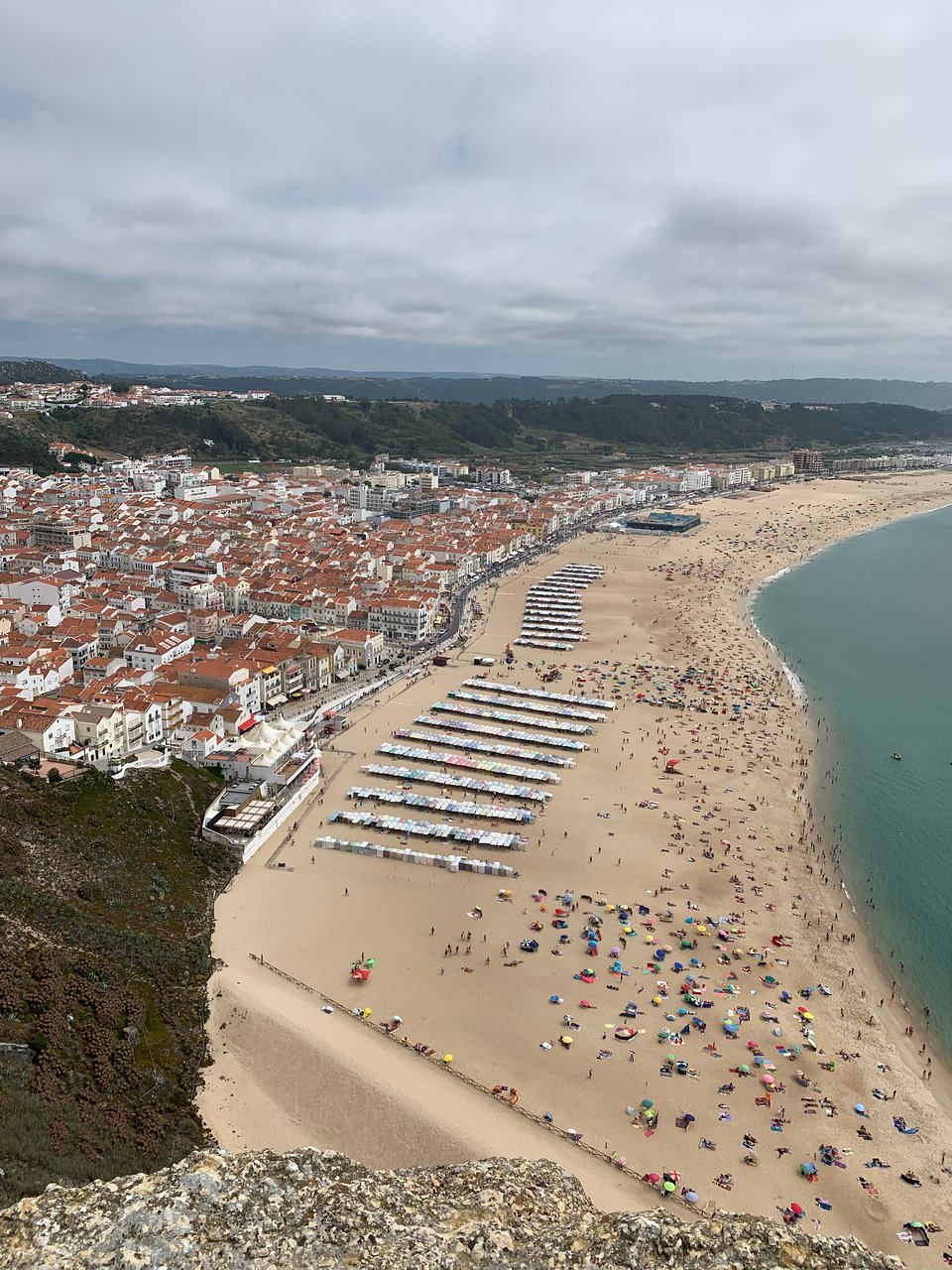 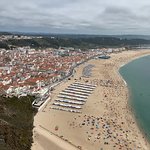 History and religion are the main themes of this trip. But we must not forget the hard work of the fishermen and the waves of Nazaré!

You can also visit the Holy Trinity Church in the Fatima Sanctuary grounds, opposite the Basilica.The church is a modern white building round the color of the stone that covers it, a local stone known as the “white sea”.With a total of 8,633 seats and an area of 40,000 m², the Holy Trinity Church is the fourth largest Catholic temple in the world in capacity.
Basílica de Nossa Senhora do Rosário
Visit the Basilica of Our Lady of the Rosary (commonly called the Basilica of the Rosary) is a basilica that integrates the Sanctuary of Fatima, located in the place of the Cova da Iria, in Fatima.

Capela das Aparições – Fátima
Monuments
The Chapel, in the heart of the current Fátima Sanctuary, was built by local people in 1919 in response to the request made by Our Lady during one of the apparitions.
The first mass to be held there was in 1921.
Although subject to certain changes, due to preservation and maintenance requirements over recent years, the modestly sized chapel retains its rough design similar to a simple hermitage.
The image of Our Lady marks the spot of the holm-oak tree, the site of the apparitions. The actual tree itself disappeared piecemeal as more fervent believers made off with it twig by twig. It was here that the shepherds came to say the rosary accompanied by other believers.

Nowadays, the Valinhos are visited by thousands of Portuguese and foreign pilgrims who take the route of the Via-Sacra to the Hungarian Calvary, visit the Chapel of St. Stephen of Hungary and then visit the House of Lucy and the House of Francis and Jacinta Marto in the village of Aljustrel.

In Valinhos, the sculptures of the Angel of Portugal and the various stations of the Via-Sacra are all written by Maria Amélia Carvalheira da Silva.

One of the most fascinating places in the Iberian Peninsula.

A decisive event for the consolidation of the Portuguese nation took place on August 14, 1385, near the spot where the Monastery of Batalha stands: D. João, Master of Avis and the future king of Portugal, overcame the Castilian armies in the battle of Aljubarrota. This victory put an end to a dynastic crisis that had dragged on since 1383, since the death of King Ferdinand, whose only daughter was married to the King of Castile, an aspirant to the throne of Portugal.

D. João dedicated the monastery to the Virgin Mary, who he had invoked to intercede his triumph and donated it to the Dominican Order, to which his confessor belonged. This gave way to the birth of a work whose construction would last for almost two centuries and which resulted in one of the most fascinating Gothic monuments of the Iberian Peninsula. The construction of the monastery also embodied the consecration of King João I as king of Portugal, thus assuming itself as a symbol of the new dynasty and legitimised by divine will.

Its architectural value and historical significance spurred the classification of the monument as a UNESCO World Heritage Site in 1983.

The construction included seven reigns of the second dynasty (1385-1580) and involved a large team of master masons of a high level, both national and foreign, that were initially directed by Afonso Domingues, until his death, in 1402. During this period, part of the church and the royal cloister were erected. He was succeeded by Master Huguet, an Englishman, who by 1438 completed the church, built the chapel of the founder and began work on the pantheon of D. Duarte. Between 1448 and 1477, Fernão de Évora designed the cloister of D. Afonso V and, in the 16th century, Mateus Fernandes was responsible for the Unfinished Chapels.

The monastery houses the most important nucleus of Portuguese medieval stained glass windows, which can be admired in the Chapel and the Chapter Hall. The central nave of the church stands at 32.5 metres and rests on eight columns on either side. In addition to the chapels and the cloisters, the monastery's dormitory, dining room and kitchen can also be visited.

The square outside was once largely occupied by the Cloister of D. João III. Burned down during the Napoleonic Wars, it was demolished during renovation works undertaken in the mid-nineteenth century. In the middle of the square you will see a tombstone that replicates the acronyms of several masons and marks the site of the old Santa Maria-a-Velha Church, the original temple where the monastery's builders attended the liturgical services.

Lighthouse of Nazaré is a Portuguese lighthouse that is located in the Fort of Saint Michael Archangel, Nazareth, West region.

It is a round, bright red lantern, with a service balcony, mounted on the wall of the fort.

The light is on for two seconds and one second is off.

A typical fishing town, Nazaré is nowadays a busy summer resort, where side by side with the crowds of tourists, one still sees all over the streets of the town the fish-sellers, and the carapaus (horse mackerel) laid out to dry. The Sítio district, at the town's highest point (accessible by a funicular), is without doubt the best viewpoint in the area. But it is also associated with the cult of Our Lady of Nazaré who, according to the 12th century legend, was invoked by the alcaide (commander of a fortress or castle) Dom Fuas Roupinho who, while stalking a deer, was about to fall down into an abyss with no possible salvation. As a sign of gratitude for the mercy he received, Dom Fuas Roupinho ordered a small chapel to be built - the Ermida de Memória. A little way away, in the 18th century the Sanctuary of Our Lady of Nazaré was built, in whose honour grandiose festivals are held in September.

The Nazaré people's connection with the sea is reflected in the local handicrafts, in particular the nets, buoys, baskets and traditional puppets dressed in the typical costumes of seven skirts, as well as in the cuisine, with its emphasis on fish and shellfish dishes, such as caldeiradas (fish caseroles), soups, açorda (purée of bread, herbs and garlic) and the dried horse mackerel.

The most important feature of the surrounding area is the 7th century Chapel of São Gião, one of the rare holy places of the Visigoths existing in Portugal.

The mediaeval town of Óbidos is one of the most picturesque and well preserved in Portugal.

Quite close to the capital and located on high ground near the Atlantic coast, Óbidos has had a strategic importance in the territory. It had already been settled prior to the Romans’ arrival in the Iberian Peninsula, and the town prospered after being chosen by the royal family. King Dinis offered it to his wife, Queen Isabel, in the 13th century, and it became part of Casa das Rainhas (Queens’ Estate), who improved and enriched it throughout the various dynasties. This is one of the main reasons for the high concentration of churches in this small place.

You will find a well preserved castle within the walls, and a maze of streets and white houses that are a delight to stroll amongst. Along with the Manueline porticoes, the colourful window boxes and the small squares, many fine examples of religious and civil architecture from the town’s golden days provide a host of reasons for making a visit.

Santa Maria Main Church, the Misericórdia Church, the Church of São Pedro, the Pillory and, beyond the walls, the Aqueduct and the round-shaped Senhor Jesus da Pedra Sanctuary, are just some of the landmarks that warrant an attentive visit. So does the Óbidos City Museum, where you will find the works of Josefa de Óbidos, an influential 17th century painter and a woman with an irreverent artistic stance for her time. Her paintings reflect her studies with the great masters of the time, such as the Spanish Zurbarán and Francisco de Herrera, and the Portuguese André Reinoso and Baltazar Gomes Figueira, her father.

Any time is good to visit Óbidos. It is an inspiring suggestion for a romantic or simply a peaceful weekend because of the love stories that have been enacted there and for its mediaeval setting; and if you include an overnight stay in the castle, then you’ll attain perfection.

The local cuisine features bouillabaisse made with fish from the Óbidos Lagoon, which will taste even better if accompanied by the wines of the region of Oeste. Another attraction is the famous Ginjinha de Óbidos (sour cherry brandy), which can be enjoyed in various places, preferably drunk from a small chocolate cup.

An all-year-round programme of events makes Óbidos a small but lively town. The most popular are the International Chocolate Festival, the Mediaeval Market and Christmas, when the town is filled with seasonal decorations. Also of note are the Harpsichord and Baroque Classical Music Seasons and the Opera Festival, which lend a special feel to Óbidos, with open-air concerts on warm Summer evenings.

Fantastic Ride is a young Portuguese company that develops activity as a Tourist Animation Agent providing solutions in ‘Tours & Routes’ format collaborating in the promotion of Portuguese Heritage and Culture presenting the locations and history of our magnificent Portugal!

As support for tourism and local activities we offer ‘Transfers’ services to and from the airport from any location in Portugal, and can carry up to 8 passengers in a safe, comfortable, air-conditioned and free Wi-Fi hotspot. Our drivers are professionals who select the routes best suited to the needs of our customers.

We intend to establish strong relationships where customer satisfaction (and our partners) is the main objective, offering support through personalised service!

Informacion Adicional
"Confirmation will be received at time of booking"
"Wheelchair accessible"
"Dress code is smart casual"
"May be operated by a multi-lingual guide"
"A current valid passport is required on the day of travel"
"Stroller accessible"
"Near public transportation"
"Infant seats available"
"Transportation is wheelchair accessible"
"No heart problems or other serious medical conditions"
"• Comfortable walking shoes are recommended"
"Most travelers can participate"
"This is a private tour/activity. Only your group will participate"
"Face masks required for travelers in public areas"
"Face masks required for guides in public areas"
"Face masks provided for travelers"
"Hand sanitizer available to travelers and staff"
"Social distancing enforced throughout experience"
"Regularly sanitized high-traffic areas"
"Gear/equipment sanitized between use"
"Transportation vehicles regularly sanitized"
"Guides required to regularly wash hands"
"Regular temperature checks for staff"
"Temperature checks for travelers upon arrival"
"Paid stay-at-home policy for staff with symptoms"
"Contactless payments for gratuities and add-ons"
"Proof of COVID-19 vaccination required for travelers"
"COVID-19 vaccination required for guides"

Hora de Inicio: 09:00 AM
Duración: 8 To 9 Hours
Lugar de comienzo: Traveler pickup is offered
We also pick up our guests at their accommodation, train station, and any other destinations on agreement.