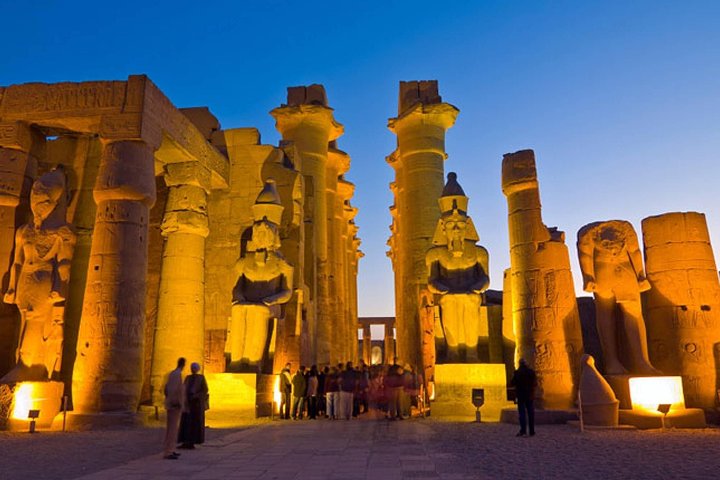 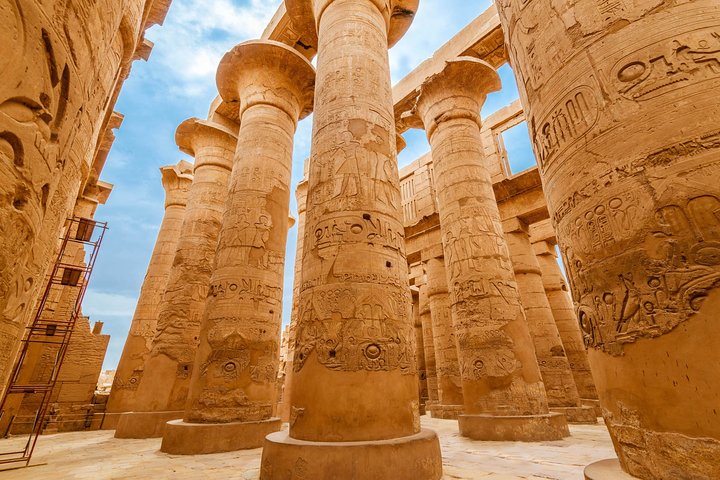 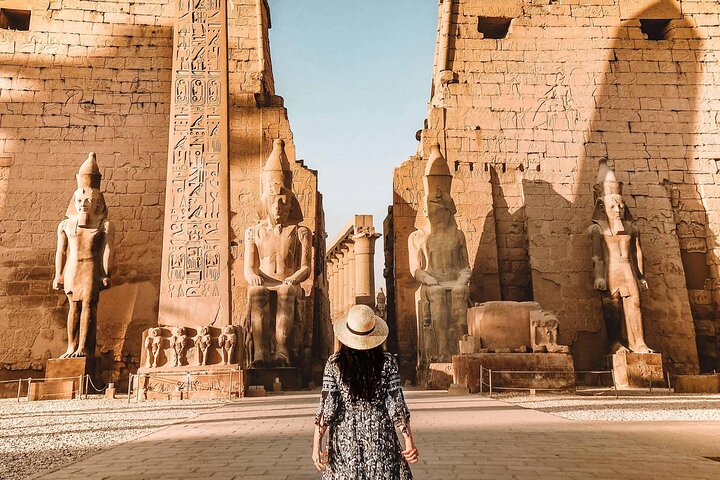 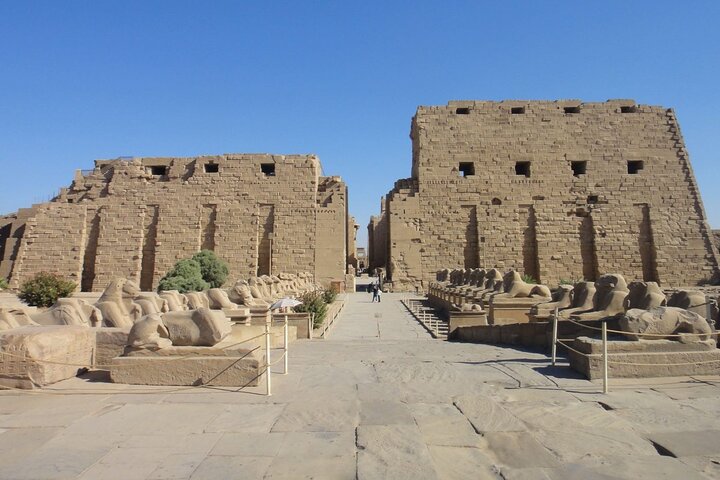 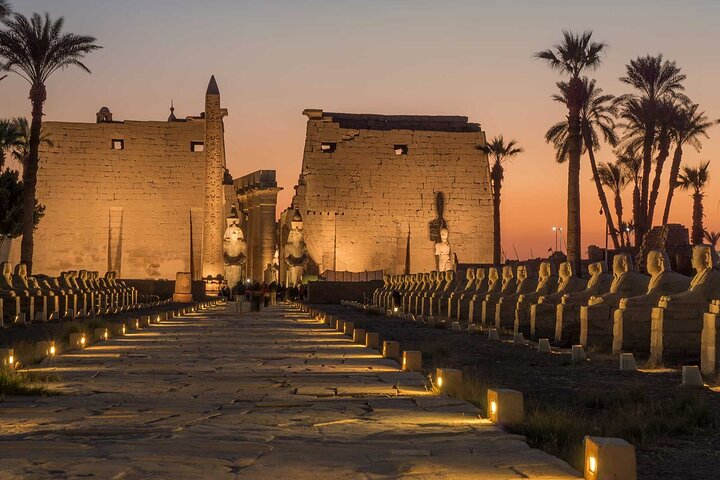 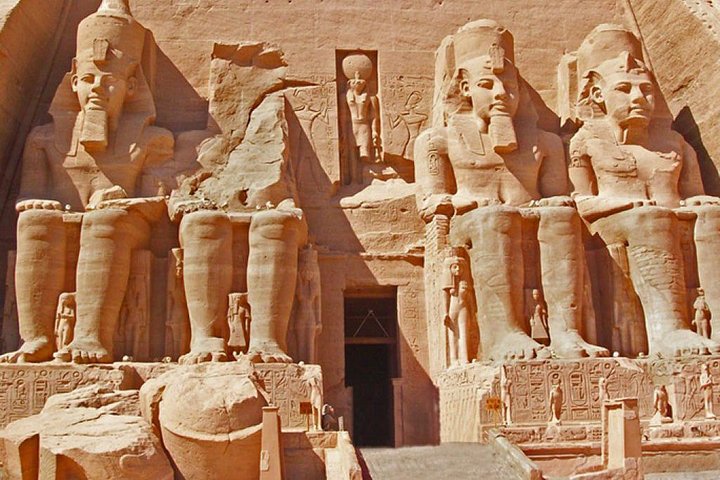 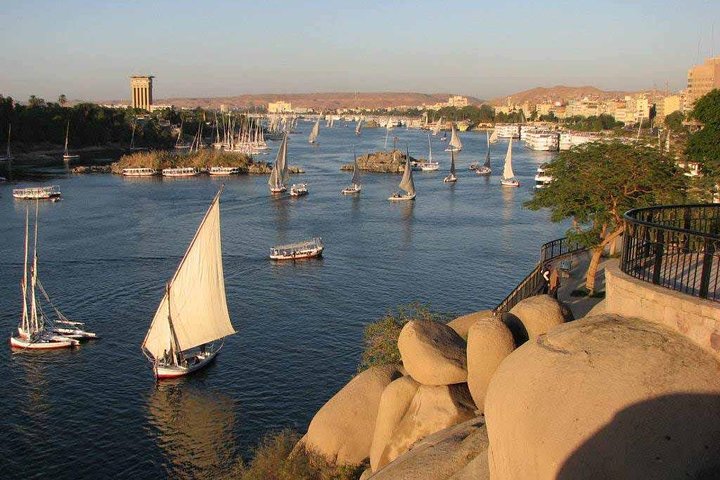 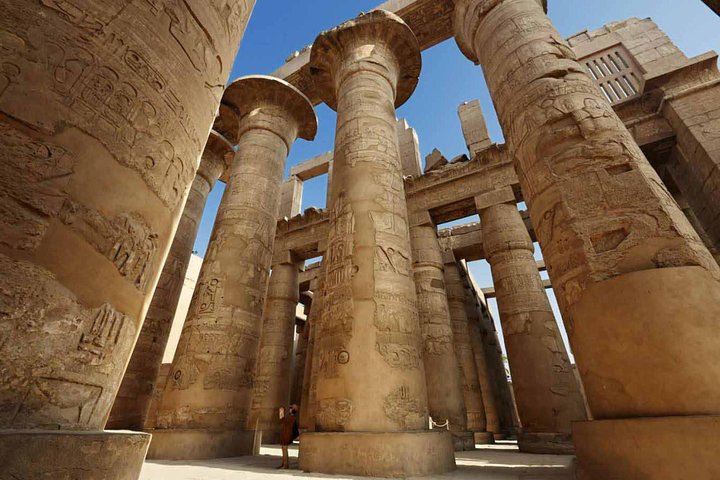 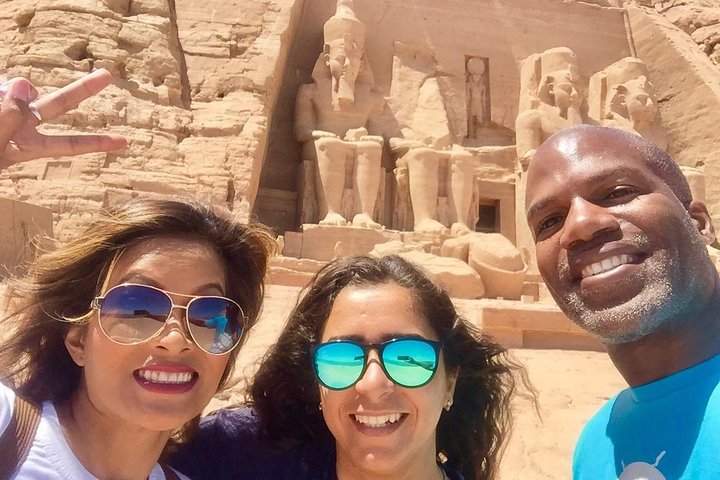 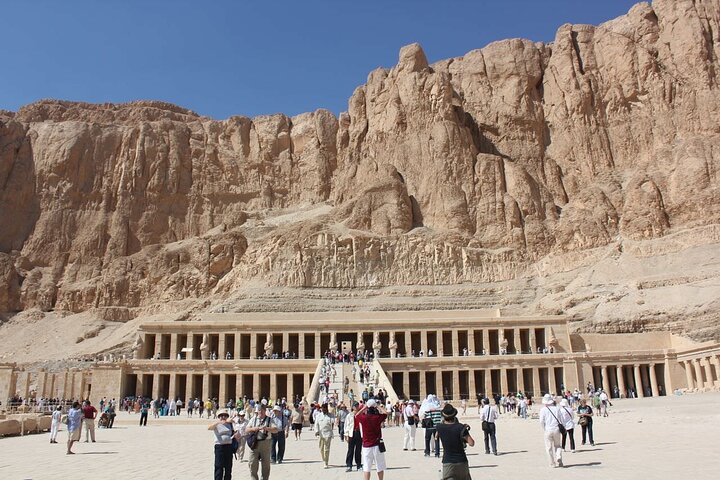 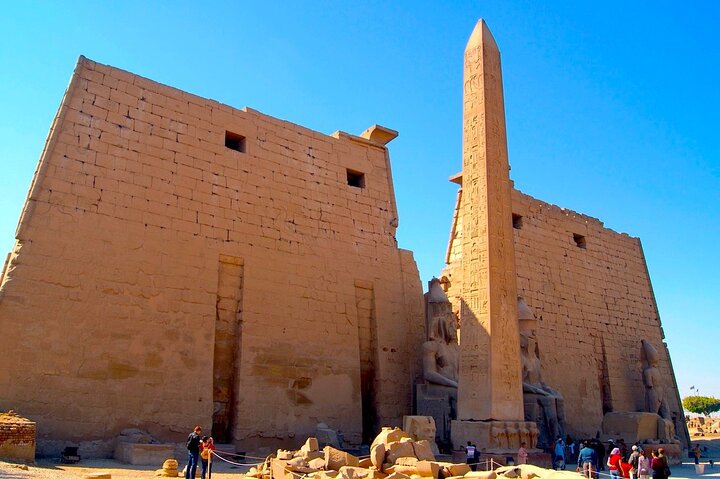 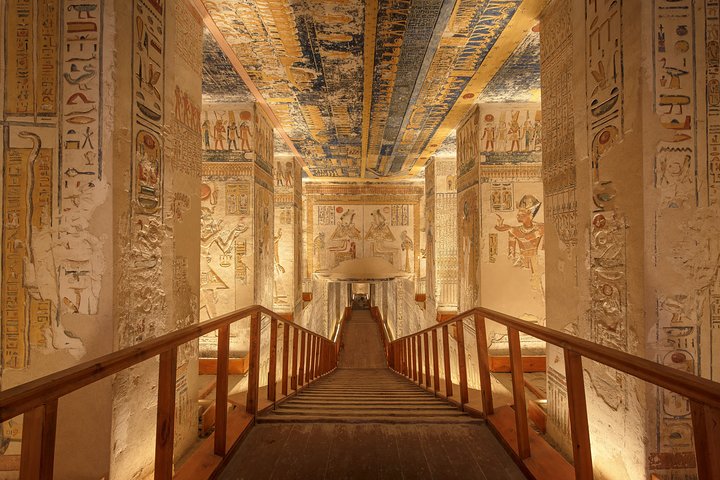 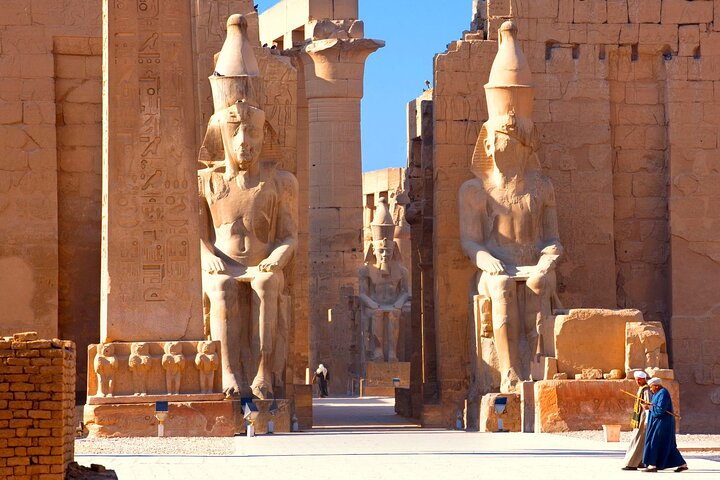 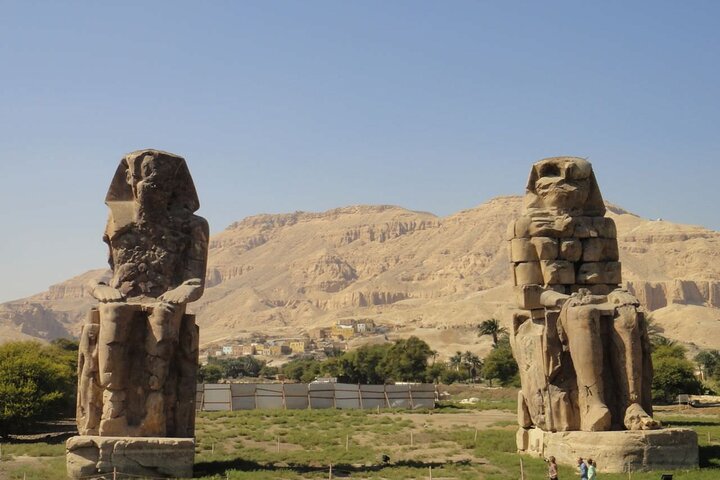 Day 1: Traveling from Cairo To Aswan by Flight and Visit Local attractions in Aswan and Abu Simbel Temple

Stop At: Temple of Philae, Island of Agilika, Aswan Egypt
Philae is an island in the reservoir of the Aswan Low Dam, downstream of the Aswan Dam and Lake Nasser, Egypt. Philae was originally located near the expansive First Cataract of the Nile in Upper Egypt and was the site of an Egyptian temple complex. These rapids and the surrounding area have been variously flooded since the initial construction of the Aswan Low Dam in 1902.The temple complex was dismantled and moved to nearby Agilkia Island as part of the UNESCO Nubia Campaign project, protecting this and other complexes before the 1970 completion of the Aswan High Dam. The hieroglyphic reliefs of the temple complex are being studied and published by the Philae Temple Text Project of the Austrian Academy of Sciences, Vienna (Institute OREA).
Duration: 3 hours

Stop At: Aswan High Dam, Manteqet As Sad Al Aali, Aswan Egypt
The Aswan Dam benefits Egypt by controlling the annual floods on the Nile River and prevents the damage which used to occur along the floodplain. The Aswan High Dam provides about half of Egypt's power supply and has improved navigation along the river by keeping the water flow consistent
Duration: 30 minutes

Stop At: Abu Simbel Temple Complex, Abu Simbel, Abu Simbel Egypt
The Abu Simbel temples are two massive rock temples at Abu Simbel , a village in Aswan Governorate, Upper Egypt, near the border with Sudan. They are situated on the western bank of Lake Nasser, about 230 km (140 mi) southwest of Aswan (about 300 km (190 mi) by road). The complex is part of the UNESCO World Heritage Site known as the Nubian Monuments which run from Abu Simbel downriver to Philae (near Aswan). The twin temples were originally carved out of the mountainside in the 13th century BC, during the 19th dynasty reign of the Pharaoh Ramesses II. They serve as a lasting monument to the king and his queen Nefertari, and commemorate his victory at the Battle of Kadesh. Their huge external rock relief figures have become iconic.

The complex was relocated in its entirety in 1968 under the supervision of a Polish archaeologist, Kazimierz Michałowski, on an artificial hill made from a domed structure, high above the Aswan High Dam reservoir. The relocation of the temples was necessary or they would have been submerged during the creation of Lake Nasser, the massive artificial water reservoir formed after the building of the Aswan High Dam on the River Nile.

No meals included on this day.
Accommodation included: Overnight Stay at Aswan Hotel

Day 2: Traveling From Aswan to Luxor by Private Car and Visit Luxor attractions

The valley stands on the west bank of the Nile, opposite Thebes (modern Luxor), within the heart of the Theban Necropolis. The wadi consists of two valleys, East Valley (where the majority of the royal tombs are situated) and West Valley.

With the 2005 discovery of a new chamber and the 2008 discovery of two further tomb entrances, the valley is known to contain 63 tombs and chambers (ranging in size from KV54, a simple pit, to KV5, a complex tomb with over 120 chambers).It was the principal burial place of the major royal figures of the Egyptian New Kingdom, as well as a number of privileged nobles. The royal tombs are decorated with scenes from Egyptian mythology and give clues as to the beliefs and funerary rituals of the period. Almost all of the tombs seem to have been opened and robbed in antiquity, but they still give an idea of the opulence and power of the pharaohs.

This area has been a focus of archaeological and Egyptological exploration since the end of the eighteenth century, and its tombs and burials continue to stimulate research and interest. In modern times the valley has become famous for the discovery of the tomb of Tutankhamun (with its rumours of the curse of the pharaohs) and is one of the most famous archaeological sites in the world. In 1979, it became a World Heritage Site, along with the rest of the Theban Necropolis. Exploration, excavation and conservation continues in the valley, and a new tourist centre has recently been opened.
Duration: 3 hours

Stop At: Temple of Hatshepsut at Deir el Bahari, Kings Valley Rd Deir el-Bahari, Luxor 23512 Egypt
The Mortuary Temple of Hatshepsut, also known as the Djeser-Djeseru (Ancient Egyptian: ḏsr ḏsrw "Holy of Holies"), is a mortuary temple of Ancient Egypt located in Upper Egypt. Built for the Eighteenth Dynasty pharaoh Hatshepsut, it is located beneath the cliffs at Deir el-Bahari on the west bank of the Nile near the Valley of the Kings. This mortuary temple is dedicated to Amun and Hatshepsut and is situated next to the mortuary temple of Mentuhotep II, which served both as an inspiration and later, a quarry. It is considered one of the "incomparable monuments of ancient Egypt."

The Polish Academy of Sciences in Warsaw is responsible for the study and restoration of the three levels of the temple. As of early 1995, the first two levels were almost complete, and the top level was still under reconstruction.
Duration: 2 hours

Stop At: Colossi of Memnon, Thebes, Luxor Egypt
The Colossi of Memnon are two massive stone statues of the Pharaoh Amenhotep III, who reigned in Egypt during the Dynasty XVIII. Since 1350 BCE, they have stood in the Theban Necropolis, located west of the River Nile from the modern city of Luxor.
Duration: 30 minutes

Stop At: Luxor Temple, Luxor 23512 Egypt
Luxor Temple is a large Ancient Egyptian temple complex located on the east bank of the Nile River in the city today known as Luxor (ancient Thebes) and was constructed approximately 1400 BCE. In the Egyptian language it is known as ipet resyt, "the southern sanctuary". In Luxor there are several great temples on the east and west banks. Four of the major mortuary temples visited by early travelers include the Temple of Seti I at Gurnah, the Temple of Hatshepsut at Deir el Bahri, the Temple of Ramesses II (a.k.a. Ramesseum), and the Temple of Ramesses III at Medinet Habu; the two primary cults temples on the east bank are known as the Karnak and Luxor. Unlike the other temples in Thebes, Luxor temple is not dedicated to a cult god or a deified version of the pharaoh in death. Instead, Luxor temple is dedicated to the rejuvenation of kingship; it may have been where many of the pharaohs of Egypt were crowned in reality or conceptually (as in the case of Alexander the Great, who claimed he was crowned at Luxor but may never have traveled south of Memphis, near modern Cairo).

To the rear of the temple are chapels built by Amenhotep III of the 18th Dynasty, and Alexander. Other parts of the temple were built by Tutankhamun and Ramesses II. During the Roman era, the temple and its surroundings were a legionary fortress and the home of the Roman government in the area. During the Roman period a chapel inside the Luxor Temple originally dedicated to goddess Mut was transformed in to a Tetrarchy cult chapel and later into a church.
Duration: 2 hours

Stop At: Temple of Karnak, Karnak, Luxor Egypt
The Karnak Temple Complex, commonly known as Karnak from Arabic Khurnak meaning "fortified village"), comprises a vast mix of decayed temples, chapels, pylons, and other buildings near Luxor, in Egypt. Construction at the complex began during the reign of Senusret I in the Middle Kingdom and continued into the Ptolemaic period, although most of the extant buildings date from the New Kingdom. The area around Karnak was the ancient Egyptian Ipet-isut ("The Most Selected of Places") and the main place of worship of the eighteenth dynasty Theban Triad with the god Amun as its head. It is part of the monumental city of Thebes. The Karnak complex gives its name to the nearby, and partly surrounded, modern village of El-Karnak, 2.5 kilometres (1.6 miles) north of Luxor.
Duration: 2 hours

Informacion Adicional
"Confirmation will be received at time of booking"
"A current valid passport is required on the day of travel"
"Not wheelchair accessible"
"Children must be accompanied by an adult"
"Dress code is smart casual"
"Service animals allowed"
"Most travelers can participate"
"This is a private tour/activity. Only your group will participate"
"Face masks required for travelers in public areas"
"Face masks required for guides in public areas"
"Face masks provided for travelers"
"Hand sanitizer available to travelers and staff"
"Social distancing enforced throughout experience"
"Regularly sanitized high-traffic areas"
"Gear/equipment sanitized between use"
"Transportation vehicles regularly sanitized"
"Guides required to regularly wash hands"
"Regular temperature checks for staff"
"Temperature checks for travelers upon arrival"
"Paid stay-at-home policy for staff with symptoms"
"Contactless payments for gratuities and add-ons"

Hora de Inicio: 3:00 AM
Duración: 2 Days
Lugar de comienzo: Traveler pickup is offered
Our Tour Representative will be waiting inside the lobby area of Customer Hotel and he will be bearing a sign shows our company name Emo Tours