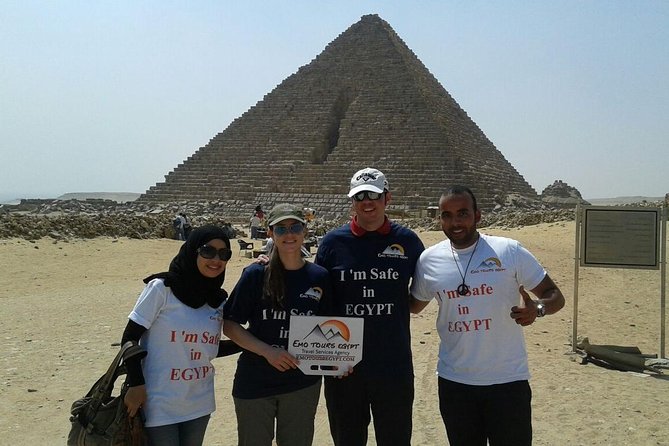 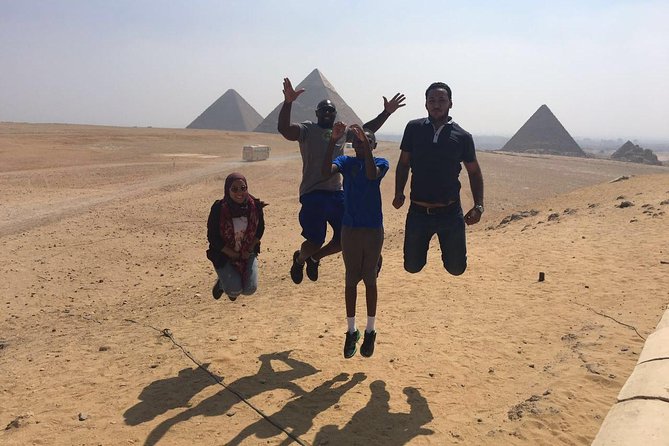 Cairo Full day tour Visiting Giza Pyramids Sphinx , Egyptian Museum, Old Cairo and Khan El Khalili Bazaar with a local certified guide tour guide Private tour includes all pickup and drop off transfers,Best Cairo things to do in one day tour if you have a short visit to Cairo then this is the best Tour Option in Cairo Covers Cairo Top attractions

The Giza pyramid complex, also called the Giza Necropolis, is the site on the Giza Plateau in Greater Cairo, Egypt that includes the Great Pyramid of Giza, the Pyramid of Khafre, and the Pyramid of Menkaure, along with their associated pyramid complexes and the Great Sphinx of Giza. All were built during the Fourth Dynasty of the Old Kingdom of Ancient Egypt. The site also includes several cemeteries and the remains of a workers' village.

The site is at the edges of the Western Desert, approximately 9 km (5 mi) west of the Nile River in the city of Giza, and about 13 km (8 mi) southwest of the city centre of Cairo.

The Great Pyramid and the Pyramid of Khafre are the largest pyramids built in ancient Egypt, and they have historically been common as emblems of ancient Egypt in the Western imagination.[1][2] They were popularised in Hellenistic times, when the Great Pyramid was listed by Antipater of Sidon as one of the Seven Wonders of the World. It is by far the oldest of the ancient Wonders and the only one still in existence.

The Great Sphinx lies on the east side of the complex. Current consensus among Egyptologists is that the head of the Great Sphinx is that of Khafre. Along with these major monuments are a number of smaller satellite edifices, known as "queens" pyramids, causeways and valley pyramids

The Museum of Egyptian Antiquities, known commonly as the Egyptian Museum or Museum of Cairo, in Cairo, Egypt, is home to an extensive collection of ancient Egyptian antiquities. It has 120,000 items, with a representative amount on display, the remainder in storerooms. Built in 1901 by the Italian construction company Garozzo-Zaffarani to a design by the French architect Marcel Dourgnon, the edifice is one of the largest museums in the region. As of March 2019, the museum is open to the public. In 2020 the museum is due to be superseded by the new Grand Egyptian Museum at Giza

The Egyptian Museum of Antiquities contains many important pieces of ancient Egyptian history. It houses the world's largest collection of Pharaonic antiquities. The Egyptian government established the museum built in 1835 near the Ezbekeyah Garden and later moved to the Cairo Citadel. In 1855, Archduke Maximilian of Austria was given all of the artifacts by the Egyptian government; these are now in the Kunsthistorisches Museum, Vienna.

A new museum was established at Boulaq in 1858 in a former warehouse, following the foundation of the new Antiquities Department under the direction of Auguste Mariette. The building lay on the bank of the Nile River, and in 1878 it suffered significant damage in a flood of the Nile River. In 1891, the collections were moved to a former royal palace, in the Giza district of Cairo.[1] They remained there until 1902 when they were moved, for the last time, to the current museum in Tahrir Square, built by the Italian company of Giuseppe Garozzo and Francesco Zaffrani to a design by the French architect Marcel Dourgnon

In 2004, the museum appointed Wafaa El Saddik as the first female director general.[3] During the Egyptian Revolution of 2011, the museum was broken into, and two mummies were destroyed.[4][5] Several artifacts were also shown to have been damaged.[6] Around 50 objects were lost.[7] Since then 25 objects have been found. Those that were restored were put on display in September 2013 in an exhibition entitled Damaged and Restored. Among the displayed artifacts are two statues of King Tutankhamun made of cedar wood and covered with gold, a statue of King Akhenaten, ushabti statues that belonged to the Nubian kings, a mummy of a child and a small polychrome glass vase

Khan el-Khalili (Arabic: خان الخليلي‎) is a famous bazaar and souq (or souk) in the historic center of Cairo, Egypt. The bazaar district is one of Cairo's main attractions for tourists and Egyptians alike. It is also home to many Egyptian artisans and workshops involved in the production of traditional crafts and souvenirs.

Informacion Adicional
"Confirmation will be received at time of booking"
"Not wheelchair accessible"
"Children must be accompanied by an adult"
"Near public transportation"
"Most travelers can participate"
"This is a private tour/activity. Only your group will participate"
"Face masks required for travelers in public areas"
"Face masks required for guides in public areas"
"Face masks provided for travelers"
"Hand sanitizer available to travelers and staff"
"Social distancing enforced throughout experience"
"Regularly sanitized high-traffic areas"
"Gear/equipment sanitized between use"
"Transportation vehicles regularly sanitized"
"Guides required to regularly wash hands"
"Temperature checks for travelers upon arrival"
"Contactless payments for gratuities and add-ons"

Duración: 8 To 10 Hours
Lugar de comienzo: Traveler pickup is offered
As per requested time our tour guide will be waiting at the lobby area and he will be holding a sign showing our company name on it