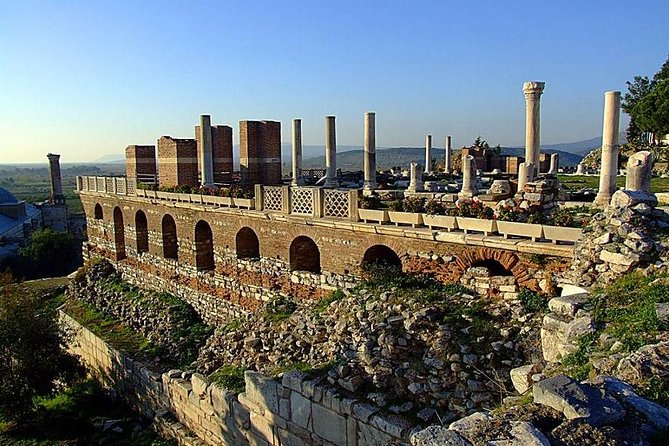 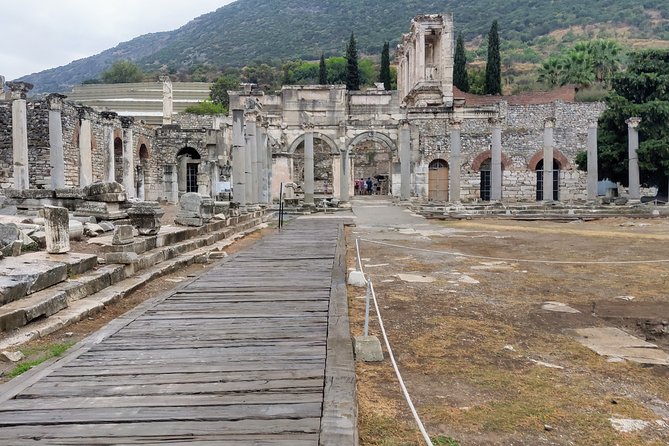 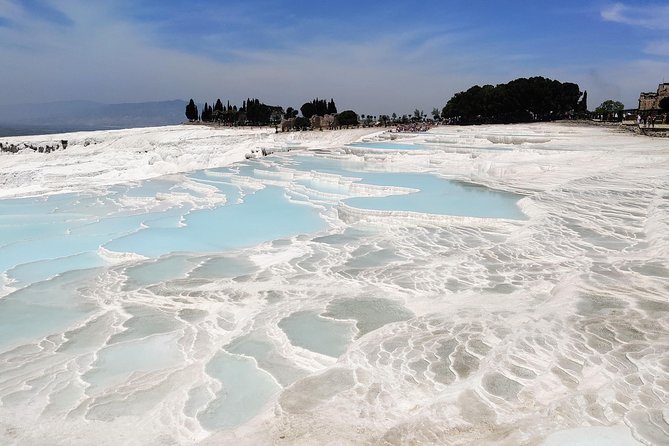 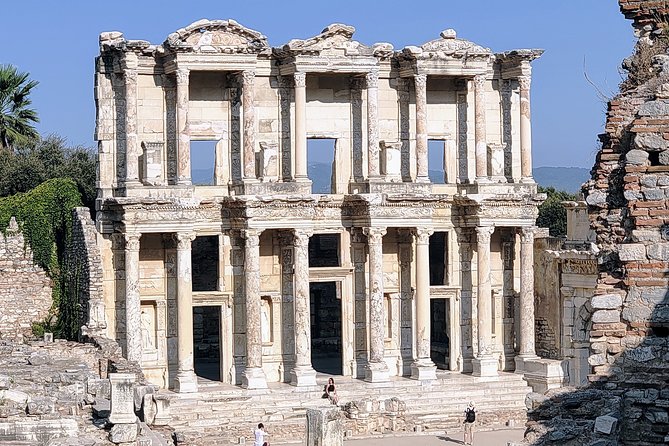 Stop At: Izmir Adnan Menderes Airport, Dokuz Eylül, 35410 Gaziemir/İzmir, Turkey
Day 1 : Izmir Arrival ( Dinner )
Upon our arrival at Izmir airport or Kusadasi port or Cesme Port , our guide will meet you with your name sign and assist and transfer to hotel. Overnight in Izmir in a 4 star hotel
Dinner included
Duration: 30 minutes

Day 2 : Pergamum – Thyatira – Izmir (Breakfast - Dinner)
After breakfast we drive to Pergamum, actually called Bergama. It is one of the sites of the Seven Churches of Asia [Rev. 1:11; 2:12]. Here we explore the impressive Acropolis, the steepest theatre in the world, the Asklepion, famous medical Centre of classical times, see the Altar of Zeus which is mentioned as the «Throne of Satan» in the book of Revelation, the marble columns of the Temple of Trajan and the Library which was foremost in the world and was long a rival of the equally famous Library of Alexandria in Egypt. Its wealth of volumes was estimated at over 200,000. It inspired the invention of parchment. Dinner and overnight in Izmir

Stop At: Tepe Mezari, Oren yeri, Akhisar Turkey
Day 2 : Then we continue our visit to Thyatira, now called Akhisar, another one of the Seven Churches of Asia [Rev. 1:11; 2:18-24; Acts 16:14]. It was a city famous for purple dyes. We visit the remains of a basilica and some architectural fragments from the Roman period. Lydia, the seller of purple in Philippi, was from Thyatira.

Before we check in at the hotel in Izmir, we enjoy a panoramic ride of Smyrna, the third largest city in Turkey and one of the sites of the Seven Churches of Asia [Rev. 2:12-17]. Smyrna is a city scarred with a bloody history of trade and warfare.
Dinner and overnight in Izmir.
Duration: 45 minutes

Today we depart early in the morning to one of the most picturesque areas of any of the Seven Churches of Asia [Rev. 1:11; 3:1-4], Sardis, presently Sart. This was the capital of the ancient Lydian kingdom of the 6th century BC, portrayed as a dying church. We visit the great Temple of Artemis and the Temple of Cybele, which became a Byzantine Church. We will also visit the restored gymnasium and reconstructed Synagogue. We also see the last several meters of the royal Persian Road from Susa to Sardis built by Cyrus the Great and the «golden» river Pactolus.
Duration: 1 hour

Stop At: Philadelphia Siesean Kilisesi, Soguksu Mahallesi, Ismet Pasa Cd. No: 114, Alasehir Turkey
Day 3 : Then we continue our journey to Philadelphia, nowadays called Alasehir, another church of the Seven Churches of Asia [Rev. 1:11; 3:7], and the only church not censured. There we see the remains of a Byzantine basilica built of brick, with a bit of high arch and some 11th century frescoes.
Duration: 1 hour

Stop At: Hierapolis & Pamukkale, Pamukkale 20280 Turkey
Day 3 : We drive to the healing city of Hierapolis, actually Pamukkale, the white «cotton fortress» where hot mineral water bursts from the earth and cascades over steep cliffs forming pools, channels and stalactites. The therapeutic waters were known to the founders of Hierapolis and of Laodicea in 190 BC. In Hierapolis [Col. 4:13] we visit the Martyrium of the Apostle Philip where he was martyred during the persecutions ordered by Domitian.
Dinner and overnight in a Thermal Hotel in Pamukkale
Duration: 2 hours

Stop At: Laodicea, Just off Denizli - Pamukkale, Denizli Turkey
Day 3 : Proceed to Laodicea (present name Denizli) yet another of the Seven Churches of Asia Minor [Rev. 1:11; 3:14; Col. 2:1; 4:13-16]. We see the ancient theatre, the remains of basilica and ancient stone water pipes.

We visit the Gate of Domitian, the Arcadian Way, the 2nd century AD Theatre, the Nymphaeum, the Temple of Apollo, the Plutonium and the Necropolis.
Dinner and overnight in Pamukkale in a Thermal Hotel
Duration: 1 hour

Stop At: Ancient City of Ephesus, Selcuk 35920 Turkey
Day 4 : Ephesus – Kusadasi (Breakfast - Dinner) Drive to Ephesus visit to the ancient city of Ephesus including the Basilica of St. John. The Apostle Paul preached to the Ephesians and lived here for three years. This church also received an epistle from him. We tour the spectacular ruins where excavations still continue in this once great and important city, which was founded in the 10th century BC.

Walk through history along marble streets lined with wonderful public buildings, among them the Baths of Scholastica, the Library of Celsus, the Temple of Hadrian and the Theatre. The Temple of Diana of the Ephesians, another of the seven wonders of the ancient world, was built in this city
Duration: 2 hours

Stop At: Meryemana (The Virgin Mary's House), Selcuk 35100 Turkey
Day 4 : The House of Virgin Mary is located on the Aladag Mountains 5 miles away from Ephesus. At the third Ecumenical Council on 431 AD in Ephesus, it was claimed that Mary came to Ephesus with St. John in 37 A.D. and lived there until her death in 48 A.D. After the discovery of the house, the Archbishop of Izmir declared there as a place of pilgrimage in 1892. On July 26, 1967, Pope Paul VI visited this place and prayed there.
Duration: 45 minutes

Stop At: The Temple of Artemis, Ataturk, Park Ici Yolu No:12, Selcuk Turkey
Day 4 : We will stop at Artemis Temple where used to be one of the seven wonders of the ancient world as our last stop before drive back to Kusadasi town.
Dinner and overnight in Kusadasi
Duration: 20 minutes

Stop At: The Basilica of Saint John, Isa Bey Mahallesi, 2013. Sk. No:1, Selcuk 35920 Turkey
Day 4 : After House of Virgin Mary, drive to St. John’s Basilica, it is believed that the evangelist St. John had spent his last years in the region around Ephesus and buried in the southern slope of Ayosolug Hill.
Duration: 45 minutes

Day 4 : After Ephesus tour , drive to Kusadasi. Dinner and overnight in 4 star hotel

Informacion Adicional
"Confirmation will be received at time of booking"
"No heart problems or other serious medical conditions"
"Most travelers can participate"
"Vegetarian option is available, please advise at time of booking if required"
"Arrival and departure details are requested"
"Visit to holy places of worship such as churches, monasteries, mosques, synagogues bare shoulders are not permitted, nor shoes in mosques."
"A dress code is required to enter places of worship such as churches, monasteries, mosques synagogues and selected museums. Knees and shoulders MUST be covered for both men and women. Shoes are not allowed. You may risk refused entry if you fail to comply with these dress requirements"
"Accommodations can be upgraded to 5 star hotels with extra $135 per person in double room"
"A minimum of 2 people per booking is required"
"This tour/activity will have a maximum of 16 travelers"

Duración: 5 Days
Lugar de comienzo: Traveler pickup is offered
Our representative will have your name sign at the airport on arrival day