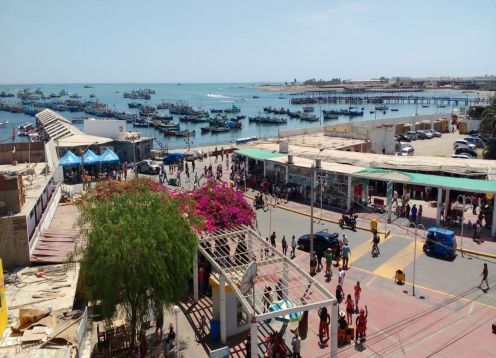 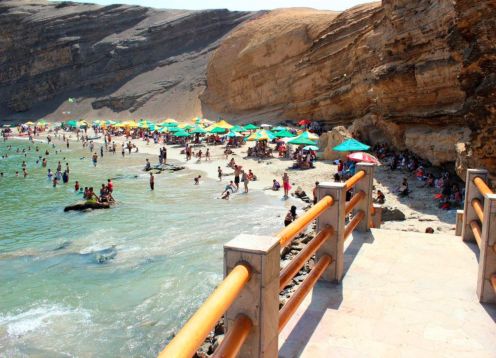 Enjoy this excursion by sea and land from the Paracas Port Terminal with a visit to El Candelabro on the Paracas peninsula, the Ballestas Islands and the archaeological site of Tambo Colorado. In the islands you will see caverns, arches and spectacular landscapes as well as sea lions resting on the rocks, living with different species of birds and other marine ones. Then to complete the package we take the Vía de Los Libertadores highway to see the archaeological remains of Tambo Colorado and its classic Inca architecture.

You will be picked it up at the Paracas Port Terminal (Puerto San Martín) and transferred to Paracas city. At the pier of El Chaco, you will take a speedboat and start your two-hour journey at sea. After seeing the bay and peninsula of Paracas on the way to the Islands you will see an enigma called El Candelabro, a large geoglyph full of mystery, its origin is unknown until today, despite the passage of time and the natural conditions remain imposing in the desert geography of the area. After 15 minutes you will arrive at Ballestas islands with its beautiful landscapes and its classic white color for the guano of islands that brought so much economic abundance to Peru. The major attraction will be stolen by the sea lions as well as some species of birds and mollusks, crustaceans, algae, annelids, echinoderms and others. When returning to the port you will take your transport to start the other part of the tour to Tambo Colorado. It goes through the districts of San Andrés, Pisco, Túpac Amaru, San Clemente, Independencia and Humay, from the highway to see this Inca archaeological zone. After visiting the small museum site to locate us in time and space and know about the Inca Empire and its presence in the coastal area through models and panels, ceramics, weapons and others. Already inside the enclosure, we see the main square, the ceremonial platform or "ushnu", the housing area and the palace of the Inca. Apparently this "Tampu" was built as an administrative, religious, military and traffic control center for those who came from the Andes to the coast and vice versa. After this visit, you undertake the return to the port where your cruise awaits you.

Informacion Adicional
"Confirmation will be received at time of booking"
"Not wheelchair accessible"
"Passport name, number, expiry and country is required at time of booking for all participants"
"Seats are assigned on the boat"
"This tour/activity will have a maximum of 45 travelers"