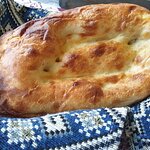 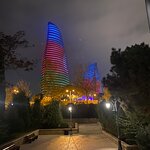 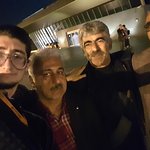 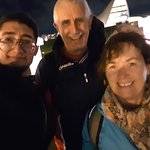 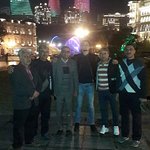 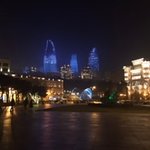 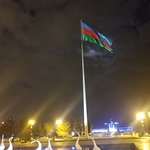 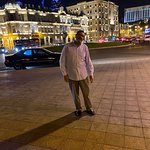 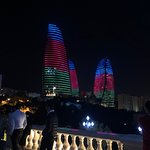 Baku Night tour is one of the "Best Seller" tours of our company. This tour is mostyl famous that
come to Azerbaijan for few days and if they have time in the evening. Tour is including dinner in the
restaurant, professional guide and transportation service.

Azerbaijan Travel International is pleased to present the Baku Night tour to our guests. Before starting the tour our guests will be served the set of national dishes of Azerbaijani cuisine. Dinner will consist of:

1. Azerbaijan national saj. (One dish which is always served in a special pan is saj.)

The Baku Night tour will be finalized with our visit to the Heydar Aliyev Center, which is considered as masterpiece of modern architecture with the style of deconstructionism from the "Queen of Curved Lines" from Zaha Hadid. On its territory, there is a magnificent park with green lawns and snow-white footpaths which pass near original sculptures and compositions, the most famous of which being the favorite of the guests of the city, "I Love Baku".

While taking the rest in this amazing park you will immediately recognize one of the architectural masterpieces of the world, which is the Government House of Soviet Azerbaijan. It took almost 16 years to construct this mammoth structure when the Azerbaijan was under Soviet authority. Moreover, historical evidences show that German prisoners of the war were used to build this huge structure.

The next stop is going to be the Baku Boulevard, which is considered as sea embankment, beauty and pride of Baku. It is 25 kilometers of magnificent park with exotic trees, shopping and entertainment centers, magnificent bicycle paths, views of the Government House of Soviet Azerbaijan. Additionally, the park is famous for having a small version of Venice. With its canals and bridges, as well as boat trips, it fascinates the guests of the city and the people of Baku.

During the tour your first stop will be the Baku’s Upland Park which is the highest point in the Azerbaijani capital, opening a panoramic view of the city and its bay. It is one of the most beautiful and peaceful places in Baku, which makes it suitable for quiet walks.

Our guide will lead you to the specific spot of the park where you will have a chance to see the unique view of the city with its beautiful lights, buildings and attractions including Baku Eye, Christal Hall and the city Boulevard. Furthermore, you will have a view of the buildings such as national parliament - the Milli Majlis, and Flame Towers, which are three high-rise buildings, including a hotel, apartments and offices. The panels between windows are horizontally covered with LED screens that display the movement of fire visible from the farthest points of the city. The lights create visual effects of torches, which emphasizes the main idea of ​​the towers lying in their names - "Flame Towers".

Informacion Adicional
"Confirmation will be received at time of booking, unless booked within 12 hours of travel. In this case confirmation will be received as soon as possible, subject to availability"
"Not wheelchair accessible"
"Near public transportation"
"Infants must sit on laps"
"Most travelers can participate"
"This experience requires a minimum number of travelers. If it’s canceled because the minimum isn’t met, you’ll be offered a different date/experience or a full refund"
"This tour/activity will have a maximum of 18 travelers"